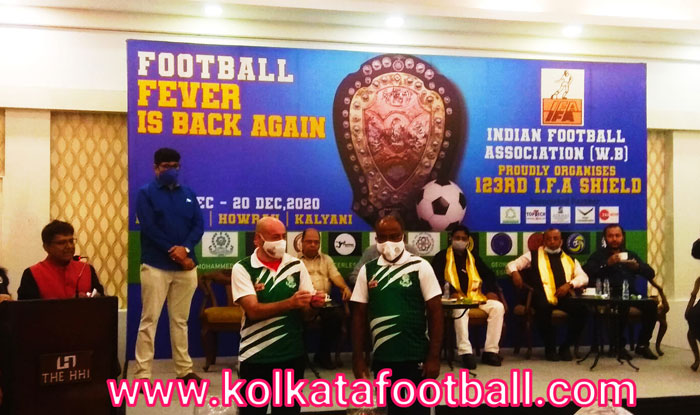 123rd IFA Shiled is going to start from 6th of December 2020. During fixture announcement there was 4 I-League teams(Mohammedan SC, Gokulam Kerala FC, Sudeva FC, Indian Arrows) along with 8 more Kolkata teams representatives are there on 18th Nov 2020. But today IFA announced that Real Kashmir FC will play instead of Delhi based side Sudeva FC in this tournament.

18.11.2020 : After a successful organisation of I league qualifiers, IFA is now all set to start the prestigious 123rd edition of IFA Shield football tournament, which will kick off at Kolkata on 6th of December. The final match will be played on 19th December.

In a city Hotel at Kolkata IFA announced the groups and the fixture of the tournament in style in presence of IFA officials and dignitries. The two Kolkata giants SC East Bengal and ATK Mohun Bagan declared their inability to participate as they are busy in ISL.

The 'Man of the Match' will receive an amount of RS 5000/- from quarter final on wards. The 'Man Of The Match' award will be presented by Top Tech. The best Coach of the tournament will receive a trophy named after legendary Late PRADIP KUMAR BANERJEE, while the best footballer trophy are also in the name of another legend, Late CHUNI GOSWAMI. These two awards will be given by Adamas University.

Twelve participating teams are divided into four groups. The four I league playing clubs are placed in four groups.