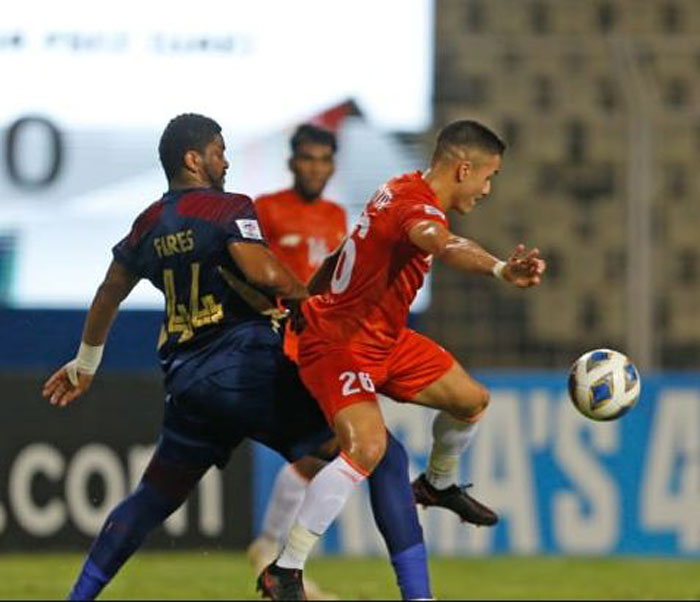 FC Goa head coach Juan Ferrando and foreign contingent leave India
29.04.2021: FC Goa’s foreign contingent including the Head Coach and foreign staff will travel back home immediately. This comes as a pre-emptive measure in view of recent policies being taken by European and other countries in regards to travellers from India as the nation battles the second wave of COVID-19 which has engulfed the country.

FC Goa is currently in 3rd position of the Group E table of AFC Champions League and will face Al Wahda FSCC today in the last match of the tournament. 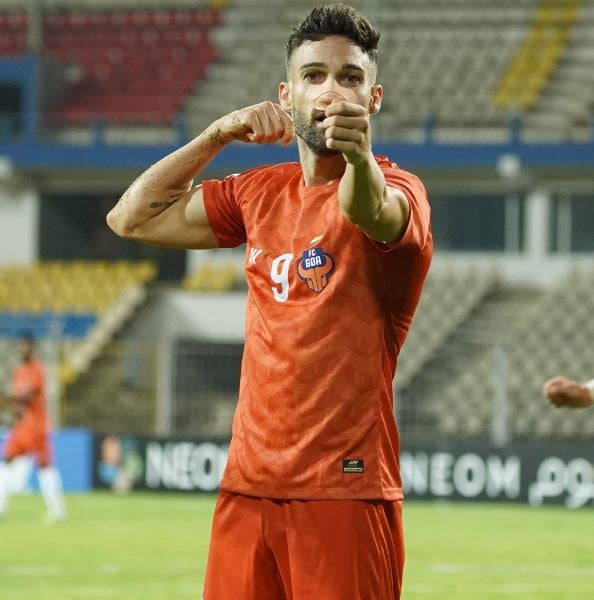 89': GOALLLLLLLLL: 1-1. Ali Ferydoon (Al Rayyan) right footed shot from the centre of the box.
70': SUB- FC GOa : Makan Chote in, Brandon Fernandes out.
57': SUB- FC GOA : Romeo Fernandes in, Alexander Romario Jesuraj out.
56': SUB - FC GOA : Devendra Murgaokar in, Ishan Pandita out.
45': SUB- FC GOA : Goa. Saviour Gama in Sanson Pereira out.
3': GOOAAALLLLL : 1-0 to FC GOA. Jorge Ortíz (Goa) left footed shot from a difficult angle on the right to the centre of the goal.
1': Match starts
0':FC Goa is now placed 3rd position in the Group E table with 2 draw.
0': Al Rayyan is in 4th Place in the table with one draw.
0': Al Rayyan have lost seven of their last eight games in the AFC Champions League (D1), including the last three in a row. They have only won one of their last 12 games in the competition (W1 D1 L10).
0':Al Rayyan have only kept one clean sheet in their last 18 games in the AFC Champions League (conceded a total of 44 goals, avg. 2.4/game). However, the clean sheet was against Goa in Match Day 1.
0':After drawing their opening two games and keeping a clean sheet in each of them, Goa have subsequently lost their last two games in the AFC Champions League conceding a total of six goals (avg. 3 goals/game).

Head Coach Juan Ferrando, FC Goa:
"As said earlier, 6 games in 20 days is very difficult. It's the same problem for all squads. The last 2 games are very important for us. It's a pleasure to participate in the AFC Champions League."

whether playing Naveen Kumar in the last game:
"It was completely tactical. We had prepared a plan. The plan didn't come good. It's my job to make the decisions, for the good of the club. "

on coaching against childhood idol Laurent Blanc:
"I was a 15-year-old kid coming through the ranks at Barcelona, looking to become a professional and he was a World Cup winner. It is one of those moments in life. Great opportunity to play against him."

on the psychology of players after a heavy loss:
"First I have to look at my own psychology. When you lose 4-0 it's tough. It was a difficult moment. We have to look at why the score was not good. And then to explain that to the players and the new plans."

on looking ahead:
"This first-time experience is important. What's most important is we can still improve. Would be scared if I knew we couldn't improve upon what we already have shown. Am confident we can improve. Players are ready. Our image will surely get a lift."

on ACL experience helping players in the ISL:
"The preparation for games is different and so is the intensity and rhythm of the games. In ISL the plan of the teams over the 90 minutes may be the same. Here tactics are changed according to moments.You have to read and prepare for these points. Focus inside the pitch is crucial. All the details are important here. One throw-in. One free-kick. Set-pieces. Build-up. Pressing. Controlling spaces, etc."

on whether FC Goa can beat Al-Rayyan:
"The second leg is different. Players are now tired unlike how fresh they were on opening day. There are suspensions and injuries. We have to remember they are a very good team. The new players coming into their side will be hungry. "

Midfielder Jorge Ortiz: on the difference in level between ACL and ISL:
"The level of the AFC Champions League is more similar to what we are accustomed to in Europe. Over the games, the intensity has become even higher. Stands us all in good stead, especially the Indian players. "

on the difference of playing as a false 9 in ACL vs. in the ISL:
"Time you have on ball. For ISL games, teams stick to one strategy mostly. You can continue to do something time and again. Here teams adapt. Once you do something hard to do it again. Need to improvise."

on whether FC Goa can beat Al-Rayyan:
"The game will be just as tough as the first one, if not tougher. They are a team that is full of quality. We will look to play to the best of our abilities. We know what is at stake here. "

0;: Goa’s goalkeeper Dheeraj Singh has made more saves than any other keeper in the 2021 AFC Champions League (15). No keeper has kept more clean sheets than Dheeraj Singh in 2021 (2).

FC Goa (INDIA) started their campaign in the AFC Champions League with 0-0 both against Qatar's Al Rayyan and UAE's Al Wahda but lost 1-2 to their 3rd match against Iran Giant Persepolis after taking the lead. 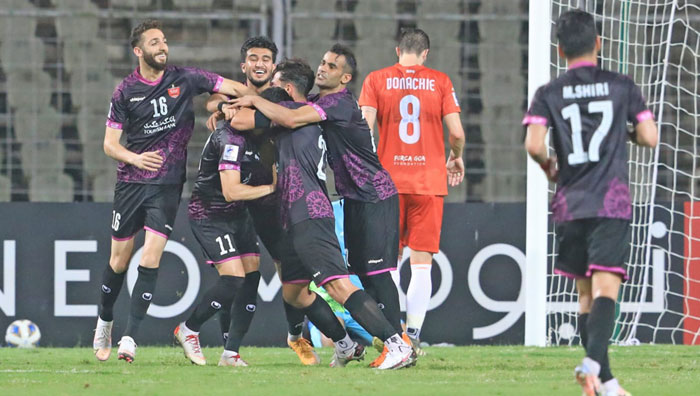 2018 and 2020 Runners Up Persepolis started their AFC Champions League with a hard-fought 1-0 victory against Al Wahda and Al Rayyan 3-1 before seeing of FC Goa. in 3rd match they beat FC GOA 2-1 to earn 9 points from 3 matches in Group-E as table topper.

FC Goa who was leading 1-0 against Persepolis with Edu Bedia's score which was his first ever AFC Champions League goal. Head coach Juan Ferrando said it is imperative for FC Goa to play against Asia's best teams for their football to develop and will urge his players to give it their all once again on Friday.

Persepolis, however, will be confident of a fourth consecutive win as the Iran Pro League champions have looked the complete package so far. They have looked comfortable in all their previous matches and their ability to score wins even after going behind is impressive and head coach Yahya Golmohammadi will be confident Persepolis will make it four wins on the trot and take them closer to the Round of 16.

O' :The team's most successful era in Asian football dated to the 1990s when they excelled at the Asian Cup Winners Cup, winning the 1990-91 title and finishing runners-up the following year.

O' :Persepolis took part in the inaugural edition in 2002-03, but bowed out at the group stage, finishing second behind Group D winners Pakhtakor.

O' :Persepolis have also won the Hazfi Cup (Iranian FA Cup) on six different occasions as well as the Super Cup three times. They also won continental silverware for the first time in the 1990-91 season by liftng the Asian Cup Winners’ Cup

O' :Iran’s all-time top goalscorer Ali Daei was the playing in Persepol and noe they have iconic players like Ali Karimi and Ali Parvin 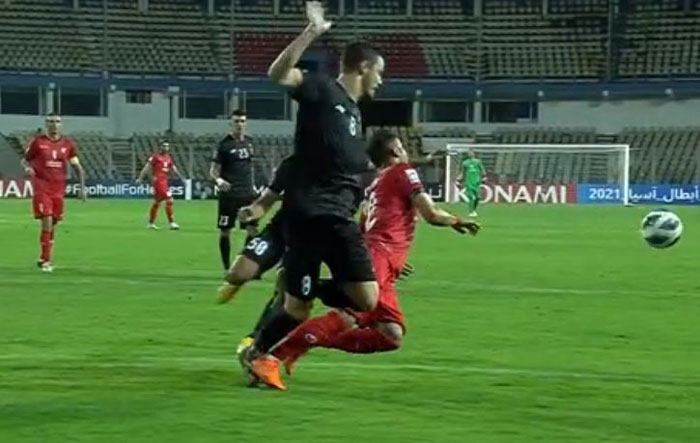 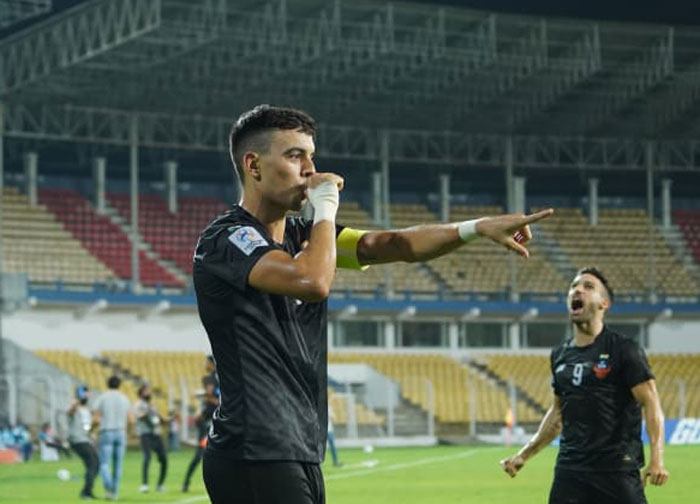 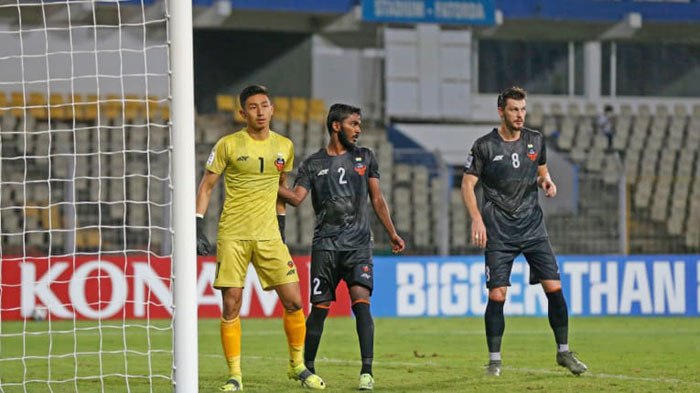 2': Attack of Persepolis through Amiri cleared by Glane Martins.
2': Right sided attack of FC GOa, Savior Gamar's long cross for Sheriton but went for Throw in.
1': MATCH STRTS JUST NOW
1': PERSEPOLIS FC ARE IN RED/RED/RED JERSEY..
1': This will be the first game between Persepolis and Goa in the AFC Champions League. Goa will be the 25th different team Persepolis have faced in the competition.
O' : Iranian giants Persepolis, known as the Red Jerseys have won the domestic league 13 times and have finished runners-up in the AFC CHAMPIONS LEAGUE twice -- in 2018 and 2020. 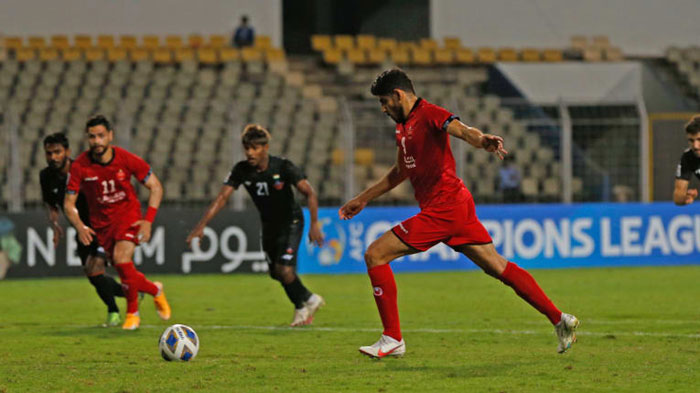 O' :The team's most successful era in Asian football dated to the 1990s when they excelled at the Asian Cup Winners Cup, winning the 1990-91 title and finishing runners-up the following year.

O' :Persepolis took part in the inaugural edition in 2002-03, but bowed out at the group stage, finishing second behind Group D winners Pakhtakor.

O' :Persepolis have also won the Hazfi Cup (Iranian FA Cup) on six different occasions as well as the Super Cup three times. They also won continental silverware for the first time in the 1990-91 season by liftng the Asian Cup Winners’ Cup

O' :Iran’s all-time top goalscorer Ali Daei was the playing in Persepol and noe they have iconic players like Ali Karimi and Ali Parvin 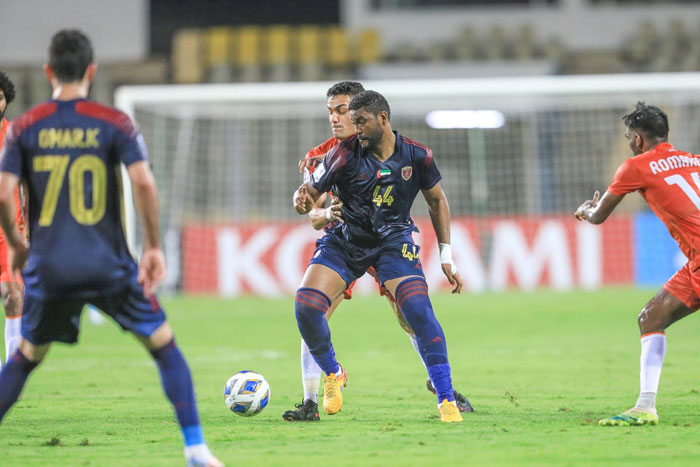 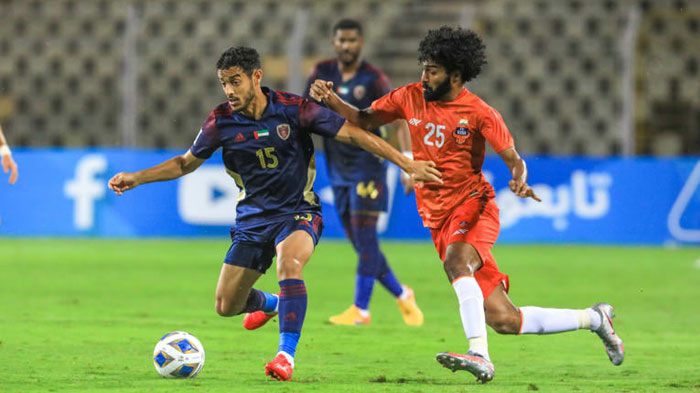 PIC- AFC
73':Yellow Card to Jorge Ortiz.
72':Another brilliant move by FC Goa, Ortiz to Brandon to Devendra, fine save by Alshamsi.
68':Fine run of Devendra from left flank, his minus but no one to follow. Good move by FC Goa on counter.
64':Substitution for FC Goa: Saviour in place of Romario.
61':Mistake from Glan, but Matavz committed foul against Donachie.
60':Yellow Card to Romario Jesuraj.
59':Yellow Card to Abdulla Alkarbi.
59':Another fine save of Dheeraj to deny a fine header.
58':Back to back two corner of Al Wahda, Dheeraj cleared first one and Pimenta's header from 2nd one went wide.
57':Fine sliding tackle to Ivan Gonzalez, corner to Al Wahda.
56':Yellow Card to Ivan Gonzalez.
54':WOODWORK!! Brandon's shot deflects from the post and another rebound shot of Romario went wide.
53':Substitution for FC Goa: Devendra in place of Ishan.
47':Good long pass to Ortiz in left, Pimenta made a fine block.
46':Second half resumed. 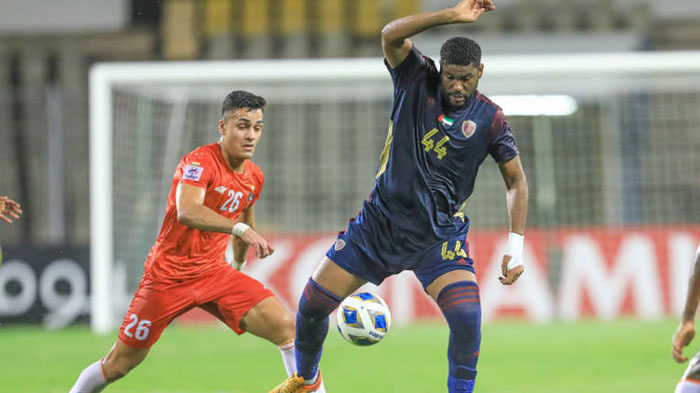 PIC- AFC
HALF TIME Score remains goalless between FC Goa and Al Wahda at half time at Nehru Stadium, Fatorda.
45'+3':Romario's cross from right flank, deflected and cleared in defence.
45'+2':Ishan Pandita again cleared the ball from corner.
45'+1':Romario's cross from right flank, cleared in Al Wahda defence. Quick Counter attack of LAl Wahda, blocked and corner.
45':4 minutes of added time.
44':Pimenta's cross, straight to Dheeraj.
43':Tim Matavz's shot, another fine save by Dheeraj to deny him.
41':Khalil's long ranger, Dheeraj made a fine save, though referee rules out the move due to OFFSIDE.
37':Seriton with a quick counter attack, but his cross went straight to Alshamsi.
34':Edu Bedia went for a big long ranger, went straight to Alshamsi.
30':Ball cleared by Ishan from the corner kick, Ortiz trying to chase the ball but keeper Alshamsi cleared it easily. 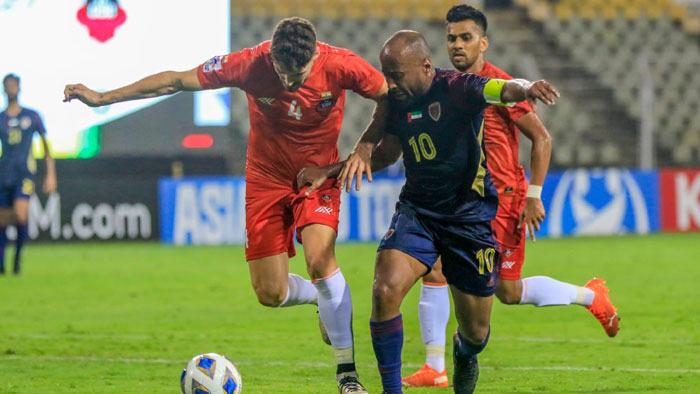 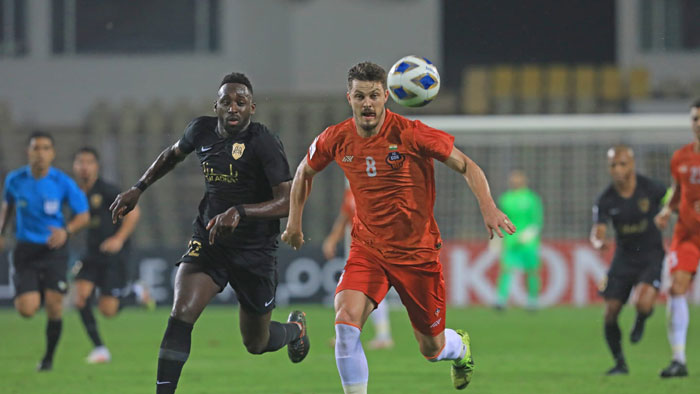 Juan Ferrando gave Ishan Pandita his first start in FC Goa colours as James Donachie and Ivan Gonzalez started as the favoured pair at the back. There was also a start for Sanson Pereira and Brandon Fernandes, the latter’s availability serving as a real boost after the Indian international missed a chunk of the ISL season owing to injury.
Goa sorted themselves out at the back soon after and started dictating the tempo as the game went on, and had their best chance of the half just five minutes from the halftime whistle. Alexander Romario struck a ferocious effort towards goal, and it needed dealing with from Fahad Younes in the Al Rayyan goal. Abdulaziz Hatem let fly from a distance just before the end of the first period, but his shot was wide enough not to trouble Dheeraj Singh in the Goa goal. 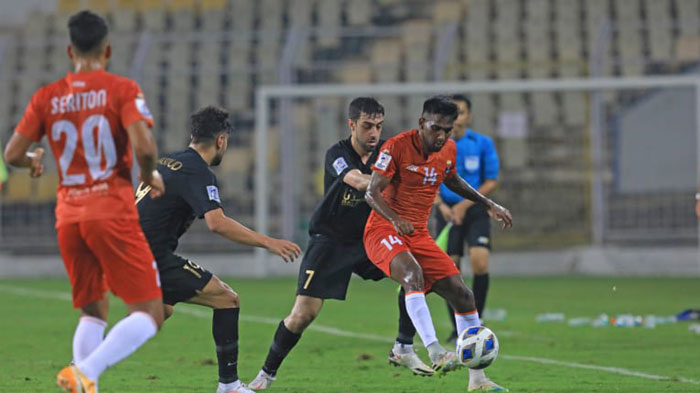 Dheeraj was largely unworked as Goa played on the counter, and perhaps should have had a penalty in the 76th minute as a cross from Romario down the right came looking for Ishan Pandita. The striker was convinced that the ball struck the hand of Mohammed Alaaeldin, but the referee waved play on.

At the other end, some desperate defending was needed in the final ten minutes, and multiple heroic efforts from Ivan Gonzalez and co in the backline kept the hosts in it. Dheeraj made a point blank save from Boli in the 86th minute as the Ivorian found himself with a free header, while Shoja Khalilzadeh headed the ball into the side netting in the 90th minute following a deep cross from the right flank.