BRAZIL EDGED PAST GERMANY IN A TRUELY CONTESTED QUARTER FINAL

77': GOAL ........BRAZIL leading
76': REPLACEMENT GERMANY: Cetin out, Boller in
75': Linchon shots wide from inside the 18 yards..... missed the target
Weverson's left footed shot from the left following a pass from Linchon finds the net
71': GOAL ..... BRAZIL equalised
64': Paulinho failed to touch a cross pass from Linchon from the right, easy chance wasted by Brazil
62': REPLACEMENT BRAZIL : Alberto in, Brenner out

59': A good diving save by the German goalkeeper Plogman denied Linchon
57': A well combined move by Brazil but at the end Alan was tackled by the German defense
53': A long ranger by Alan but it was too far away from the German goal
49': Nicholas blocked timely by the Brazalian defense as he was moving dangerously inside the 18 yards
46': REPLACEMENT BRAZIL: Candido out,Weverson in
46': second session starts, Brazil kicks off

45+2': HALF TIME SCORE: GERMANY 1-0 BRAZIL
45': 2 minutes added time
43': Marcos cleared a cross pass from Josha from the left .... danger avoided in front of Brazilian goal
40': A good block by Dominick prevents a Brazilian attack
37': A good collection by Plogman denied Cetin who was dangerously following a lob from outside the 18 yards
33'; Brenner covered by Yaan as he was following a forward pass from the midfield

23': A left footed grounder from Elias of Germany from the left, missed the target by a whisker
20': GOAL .......Jann Fiete converts the penalty
19': PENALTY for Germany as John was tackled from behind by Lucas
16': A cross pass from from Dominick from the right cleared by Wesley out of the danger zone
13': A forward pass for Linchon from the midfield but Yaan cleared the ball out of the danger zone
10': A well combined move by Paulinho and Linchon of Brazil but Plogman was alert to control the situation
8'; A break away move by Germany cleared by Brazil defense

GERMANY AND BRAZIL TO CLASH IN A HIGH PROFILE QUARTER FINAL AT YUBABHARATI
KFC NEWS DESK - 19.10.17: The preliminary stages are over, as the the U 17 World Cup is entering into the final rounds to decide the winners of the tournament. The quarter final rounds are at the corner where the top seeded eight teams will fight for a berth in the semifinal.

The most high profile match of the competition is schedule on the Sunday evening at the picturesque Vivekananda Yubabharati Kriangan, between Brazil and Germany. These two teams are always a strong nation in world football played some memorable matches in the recent past. Brazil lost against Germany by a margin of 1-7 in 2014 World Cup. It is a good chance for Brazil to revert the result in their favour.

The senior team of Germany won the World Cup four times, but the junior team is yet to taste the flavour of winning the U 17 World Cup. The German coach, Christan Wueck while interacting said, " The match against Brazil will be big and an interesting match." Wuech opined that the main purpose of playing U 17 World Cup is to devolope the players, so that they can serve the senior national team in future.

Brazil seems to be the most well combined team in the tournament so far. The nation from Latin America scored nine goals and conceded just a single goal in the four matches they played. In the last match against Honduras in the round of sixteen, Brazil could have scored more goals, but it looked that the Brazilians are quite relaxed in the second session and conserve their energy for the remaining matches in the knock out stages.

Brazil can be rated as one of the contenders of the tournament are set to face the challenge of the Germans. The chief coach of Brazil Carlos Amadeu, while interacting said that he is quite relaxed and the quater final clash against Germany would be another difficult match in the tournament. Amadue added that his team is foucused against the Germans, are confident for a positive result at Kolkata.

SPAIN CRASHED IRAN TO MEET MALI IN THE SEMI-FINAL

FIFA MEDIA RELEASE : Spain eased their way into the semi-finals of the FIFA U-17 World Cup India 2017 with a 3-1 victory over Iran in Kochi on Sunday.

It was the European champions that dominated proceedings from the kick-off, with Abel Ruiz putting them ahead before the quarter-hour mark. On the rebound, the Spain captain drove his shot past Iran goalkeeper Ali Gholam Zadeh. La Rojita nearly doubled their advantage, but Gholam Zadeh made a superb save to deny Cesar Gelabert at his feet, with the ball flying over the Iran crossbar.

Any hopes Team Melli had of a comeback ended on the hour mark, as Sergio Gomez scored a fantastic goal when he received a Ferran Torres pass before turning and beating Gholam Zadeh with a left-footed long-distance strike. Torres then added a third goal when he converted Mohamed Moukliss’s low cross. Though Saeid Karimi pulled a goal back for Iran, Spain held on to secure their spot in the last four and a meeting with Mali in Navi Mumbai on Wednesday.

90+5': FULL TIME SCORE: ENGLAND 4-1 USA
90+5': Referee blew the final whistle
Rhian BREWSTER converts the penalty
90+5': GOAL ..... ENGLAND increased the lead
90+4': RED CARD to Sergino DEST of USA
90+4': Dest tackeled BREWSTER from behind, penalty for England
90': 5 minutes added time
89':REPLACEMENT ENGLAND: Callum out, Daniel in
88': YELLOW CARD to Conor of England misses the semi final
84': REPLACEMENT ENGLAND: Forden out ,Kirby in
82': USA had some good moves but failed to beat the strong English defense
80': REPLACEMENT USA: Watta out Bryan in
77'; REPLACEMENT ENGLAND: Morgan out, Conor in
73': REPLACEMENT USA: Indiana in Ferri out
Josh SERGANT scored following a pass from Anderson from the right
72': GOAL ...... USA SCORED
67': Anikola failed to place a ball in open goal following a pass from the right
Morgan WHITE scored following a square pass from Rhian BREWSTER from the right
64': GOAL .....ENGLAND SCORED
62': A push by Forden but punched away by Justin
60': England earned three corner in a row which was cleared by the USA defense
55': REPLACEMENT USA : Taylor out, Sergino in
54': England are in continuous attack, but a good goal keeping by Justin prevents them
49': A chance for England, but Gibbs blocked by Justin
46': Second session kicks off
45+2': HALF TIME SCORE: ENGLAND 2-0 USA
45+2: Referee indicates for half time
45': 2 minutes added time
40': A well combined move by USA through the middle, but at the end Sergant shoots wide over the cross bar
37': A Powerful shot by Booth, but Anderson saved confidently
35': USA had some close chances to recover the deficit, but were unlucky to convert
35': YELLOW CARD to Taylor Booth of USA
29': Rhian BREWSTER shoots wide following a pass from the right
24': Akinola's powerful shot punched away by Anderson
22': Segant's push following a corner hit the cross bar,close chance wasted by USA
19': USA missed again, Tim WEAH shoots wide from inside the 18 yards
17': Chance for USA , CARLETON shoots wide
Rhian BREWSTER lobs the ball over the on rushing goalkeeper
14': GOAL ..... ENGLAND increase the lead
Rhian BREWSTER converts following a pass from Ayo from the right
10': GOAL..... ENGLAND SCORED
6': A chance for England cleared by USA defense
4': First positive chance of the match ...... Justin saved a powerful shot from England
0': Match starts.....USA kicks off

USA TO MEET ENGLAND IN QUARTER FINAL AT GOA

KFC NEWS DESK - 20.10.17 :In an important quarter final of the U 17 World Cup at Jawaharlal Nehru Stadium in Goa,England will face USA on Saturday evening. England won against Japan in a round of sixteen match at Kolkata by a margin of 5-4 in penalties after a barren ninety minutes , while USA crashed Paraguay by a mammoth margin of 5-0 as Tim Weah scored a hatrick.

England had an impressive performance in the Group League stages won all the matches they played. The under-17 team were beaten in the final of the UEFA European Championship by Spain on penalties but are in a target to perform at the peak in India in the U 17 World Cup. Though Jadon Sancho one of the key footballer of the squad will be unavailable as he been called back by his club Borussia Doutmund.

England and USA both earned nine points in the group league stages promises to be a tough quarter final on Saturday evening. USA had a tough fight against Ghana and Columbia at the initial stages but played a team game against Paraguay in the round of sixteen encounter. While the two nations have met twice at the Men’s World Cup (1950 and 2010), Saturday’s encounter between the U.S. and England will be the first at the U-17 tournament.

It will be indeed a tough match for both the teams on Saturday at Goa. The winner of the match will meet against Germany or Brazil in the semifinal. 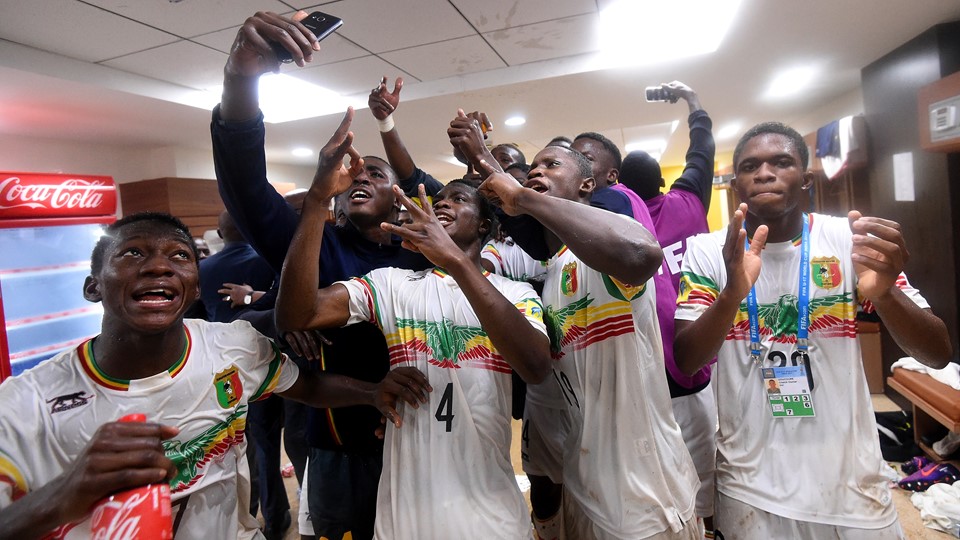 FIFA MEDIA RELEASE - 21.10.2017 : Mali held on to defeat Ghana 2-1 and reach the semi-finals of the FIFA U-17 World Cup India 2017 on Saturday. The result follows victory over their West African rivals in this year’s CAF U-17 Africa Cup of Nations final and moves them into a last-four meeting with either Iran or Spain in Navi Mumbai on Wednesday.

In very wet weather at the Indira Gandhi Athletic Stadium in Guwahati, both sides did well to play through the conditions, with Mali dominating to opening half. The Eaglets took the lead on the quarter-hour mark, as Hadji Drame broke in on the Ghanaian goal before putting his shot past Black Starlets goalkeeper Danlad Ibrahim for his third goal of the tournament.

Ghana then had the ball in the opposite net just before half-time, however Ibrahim Sulley’s effort was disallowed for a foul by team-mate Kudus Mohammed in the build-up.

Just after the hour mark, Mali scored their winner through Djemoussa Traore. He beat the back-tracking Danlad Ibrahim with a long-range effort after the Ghana goalkeeper misjudged his rush off his goalline to make an attempted clearance outside his box.

With 20 minutes to go, Ghana halved the deficit through a Mohammed penalty after substitute Sadiq Ibrahim was fouled in the Mali box but, in the end, the Eaglets held on to secure a second appearance in the last four at a U-17 World Cup in as many tournaments. Their only disappointment is a suspension to Mali captain Mohamed Camara for the semi-finals through the accumulation of yellow cards.