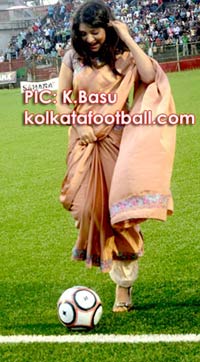 Mohun Bagan registered 29 players so far in the IFA office. The 29 players who have been registered for the I-League 2015-16 so far are given below -

14.01.2015 : Atletico de Madrid and Real Madrid were found to have violated several provisions concerning the international transfer and first registration of minor players as well as other relevant provisions with regard to the registration and participation of certain players in competitions.

14.01.2016: SFC PRESS RELEASE : Loyola High School, sponsored by Salgaocar Football Club, has been dominating the various age groups in interschool football tournaments. The under 15 team, winners of the Goa leg of the Star Sports Young Heroes, presented by Parle in association with IDBI Federal Life Insurance, has qualified for the All India Finals to be played at Kolkata on 16th Jan. 2016. The U-15 team is seen above with Loyola High School faculty & Salgaocar FC officials.

The Principal, Fr. Peter Rodrigues had this to say “At Loyola's we create an ambience for every boy to inculcate a love for football; apart from his studies. We are consistent in our performance and have contributed players for the National team, I-League, Goa Professional League as well as Indian Super League in the country. We are grateful to Salgaocar Football Club for taking the initiative in contributing towards expenses of the team which will shortly leave for Kolkata and also for their continuous support in all school football activities. Salgaocar FC continuously supports and encourages the coaches to update and improve their knowledge as well as to constantly strive to upgrade their licensing so as to reach the potential of each and every player. To this effect, a variety of innovative programs are conducted to meet the interest and ability of the players. This year also the school football teams U-13/14/15 and 17 categories have performed well in the various interschool football tournaments. They all are doing well because of the continuous support from the school management and Salgaocar Football Club. We wish the team all the success.

Ms. Swati Salgaocar, Vice-President - Youth Development, Salgaocar FC, also added "We at Salgaocar FC are proud of our long standing association with Loyola High School, an institution that shares our passion in promoting football among Goan youth. All of us at Salgaocar FC would like to wish them great success in their campaign at the Star Sports Young Heroes tournament.”

Team performance for the Academic year 2015-2016
U-13 Runners up for Bro. Slatery cup held at Chicalim
U-14 Subrato cup Taluka runners up (a total of 52 teams participated)
U-14 Runners up for Fr. Pedro Arrupe cup organized by St. Britto old boys association
U-15 State Champions and qualified for Nationals to be held at Kolkata organized by Star Sports
U-17 South Goa champions and State runners up.