The following players were awarded according to the number of votes they received from their fellow professional colleagues in Ileague & ISL. The voting for the 2020-21 season was conducted online due to the relevant Covid -19 protocols which the players had to follow.

The winner of the award received the maximum number of votes. (Go BELOW) 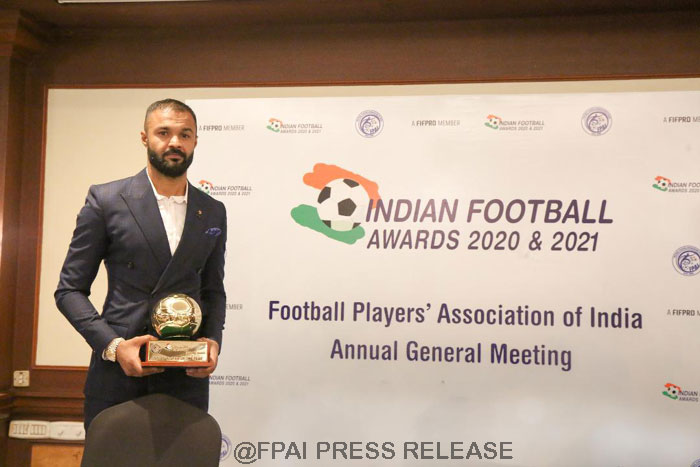 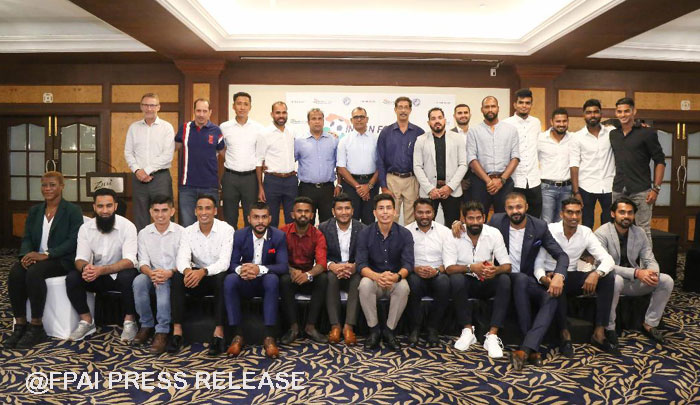 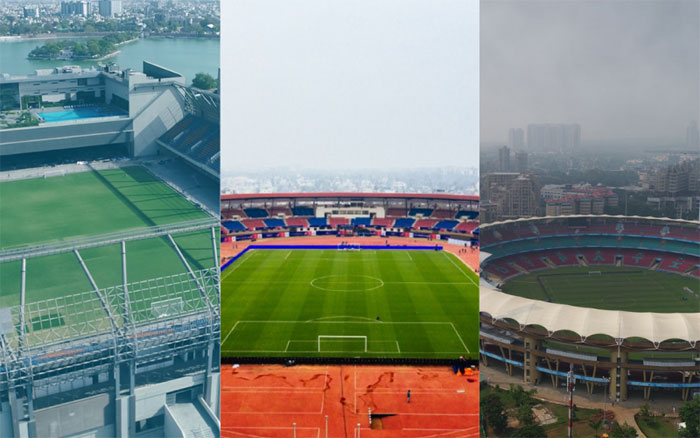 1. D.Y. Patil Stadium - Navi Mumbai - Inaugurated in 2008, the DY Patil Stadium is located on the outskirts of Mumbai and has world-class facilities capable of hosting multi-sports international events. With a stadium capacity of 37,900, DY Patil Stadium is the largest venue of the AFC Women’s Asian Cup India 2022.

2. Ahmedabad’s Trans Stadia - Opened on October 7, 2016, TransStadia was constructed under a public-private partnership and will be the newest of the three stadiums to host the AFC Women’s Asian Cup India 2022

3. Kalinga Stadium - Bhubaneswar - Built in 1978, Kalinga Stadium is a multi-purpose international stadium situated in the heart of the city of Bhubaneswar. The grounds have served as a focal point for several international sporting events have been selected as the three stadiums and host cities that will provide the ultimate backdrop for some of the finest players in Asian and world women’s football from January 20 to February 6, 2022.

AIFF President and FIFA Council Member Praful Patel said: “We are excited to kick off the new year with the AFC Women’s Asian Cup India 2022. Ahmedabad, Bhubaneswar and Navi Mumbai have put in a lot of work to upgrade their footballing infrastructure.

“While we have seen Navi Mumbai deliver spectacularly in 2017 for the FIFA U-17 World Cup, we are taking the game to new places with Bhubaneswar and Ahmedabad through the two women's tournaments next year, which is really encouraging for our overall football ecosystem." 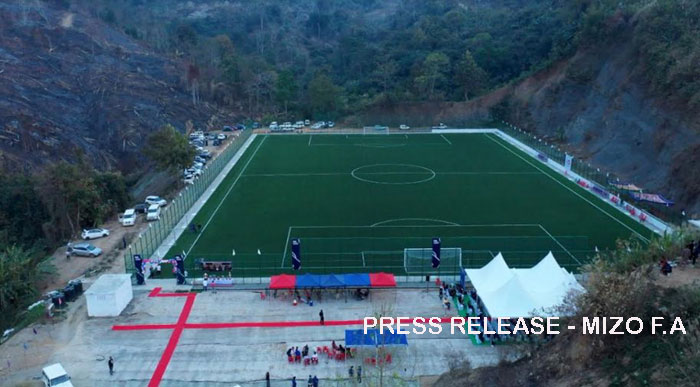 GRASSROOTS & VETERAN FOOTBALL : The unveiling of the new MFA Ground was celebrated with a Grassroots Football Festival prior to the inauguration programme where 50 children from the AIFF-MFA Grassroots programme took part in showcasing their skills in an exhibition match. A Veteran Exhibition Football Match also took place where former footballers who have represented the state in competitions took part as homage from the MFA for their past sacrifices and endeavours. Former Mizoram football stars played a fantastically jovial match to celebrate their part in being the torch bearers of football in Mizoram.

SPORTS MINISTER's MESSAGE : Sports minister Robert Romawia Royte expressed his gratitude saying, "As a football lover myself, I am elated that I am able to unveil a ground constructed through the aid of FIFA. For this I am grateful to the AIFF and FIFA. I am also delighted that this kind of backing from FIFA is earned only through the work of the MFA, the District FAs' and the successes of our footballers." "We will ensure that proper grounds are laid in every district headquarters and in several sub division headquarters. The demand for artificial turfs might not be visible to some, but it is an objective for us to built proper football grounds without prompting additional strain on the state's finances. We have a target of 24 artificial turfs in Mizoram, which will be a record in India." 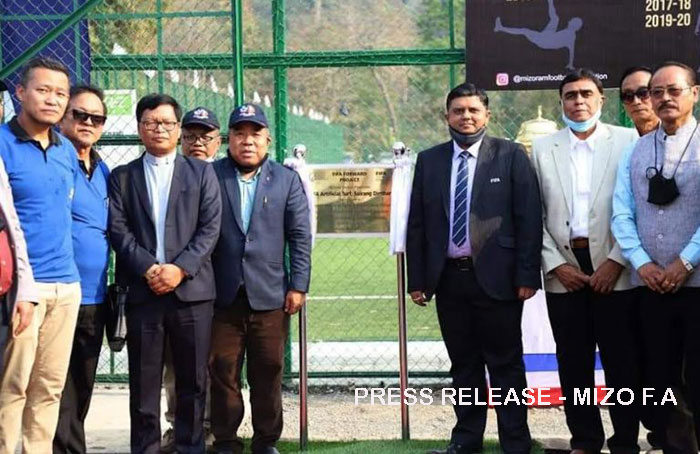 MESSAGE FROM THE MFA : MFA President Lal Thanzara welcomed the esteemed guests at the inauguration as he thanked the efforts laid by all the necessary personnel in the fruition of the MFA Ground. He stated that the MFA Ground is a result of the collaborative effort of the MFA, DFA, Zone FA, players and every essential personnel in football.

The MFA Honorary Secretary Lalnghinglova Hmar gave a detailed account of how the new ground came into completion and he remarked, "As we unveil this new ground, we remember all the efforts of our predecessors at the MFA, our past players and coaches. We are now reaping the benefits of their hard work and sacrifices, and for this, this ground is truly a result of our collective effort and this is a ground for the people." 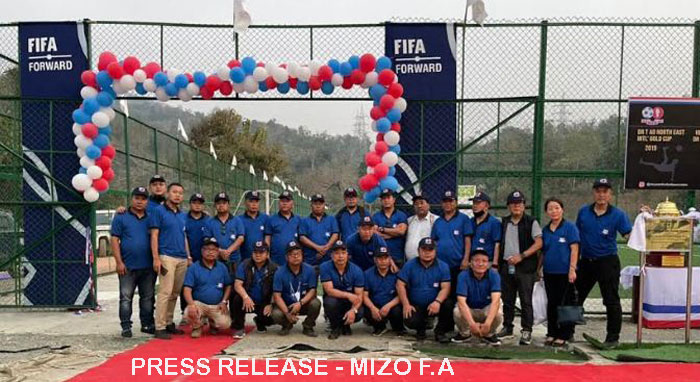 The Honorary Secretary also thanked the people of Sairang Dinthar for their support; as well as mentioning the support of the government who aided the efforts of the MFA with Rs.80 lakhs in cultivating the site of the rocky ground.

MESSAGES FROM FIFA & AIFF : FIFA's South Asia Development Officer Prince Rufus, who has been instrumental in the execution of the ground also attended the unveiling and he commended the efforts of the MFA in constructing a world class football ground in a hilly region with tropical weather.

“Over the years, Mizoram has unearthed so many talents – some of whom have gone on to earn laurels for India as an International footballer, and so many at the domestic level. I am confident that the artificial turf will help the Mizoram FA to further broad base the sport in the state, and allow a training ground for the future stars in the sport.” “AIFF appreciates and is thankful to FIFA for all their help and look forward to the support and cooperation all throughout.” 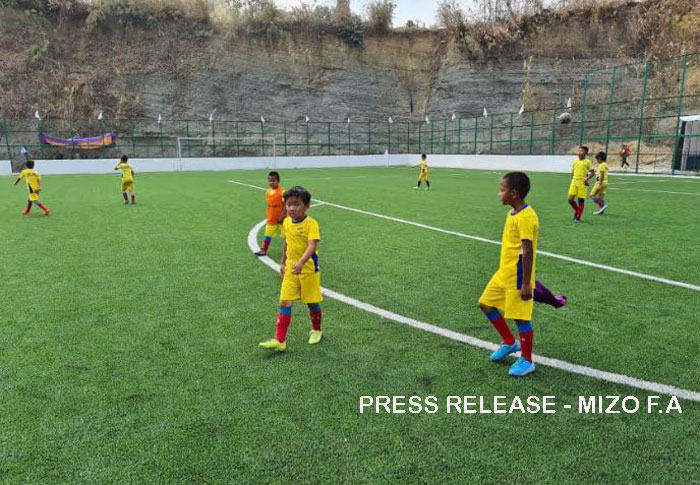 AIFF General Secretary Kushal Das also sent a message saying, “The passion for football in Mizoram is unparalleled. There have been so many talented players from the state who have played with much repute at various clubs all over, and also at the International level. The artificial turf under the FIFA Forward Programme which the AIFF has granted to the Mizoram FA will go a long way in providing an additional practice base for stars of the future.”

“The AIFF is indebted to the FIFA for their help and support to Indian Football. I wish good luck to the Mizoram FA and look forward to them carrying on the good work at the Grassroots, and building on from there to take Indian Football Forward Together.” The MFA Ground unveiling was attended by MFA and District FA delegates, forward Mizoram footballers as well as special invited guests.

Some facts about the new ground :

- Playing area is 105x68 Metres
- Turf covered area is 111x74 Metres. (Includes an extra metre on each side.)
- It is surrounded by 4 metre high steel wire mesh on all sides with a 6 metre mesh behind each goals.
- A 15x10 ft concrete store-room is also constructed by the main entry.
- Substitute bench, goal post (with additional two mobile goal posts), corner flags are all set up coming from FIFA.
- A tractor for maintenance of the artificial grass as well as several maintenance equipment have all been provided by FIFA.

08.03.21: Indian Football Association today at a function, felicitated mothers and wives of the footballers on the occasion of International Women's Day. This is the first occasion IFA is organizing such an eventful programme. 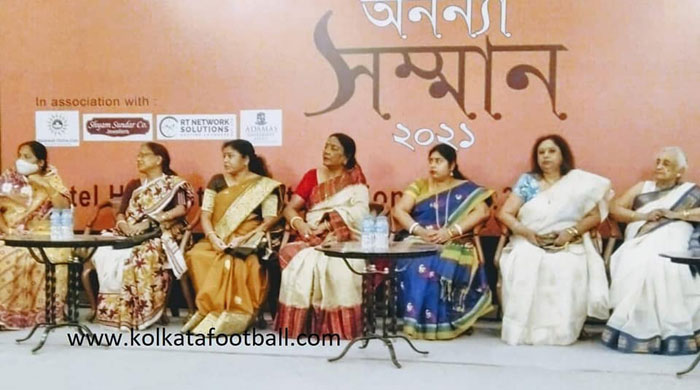 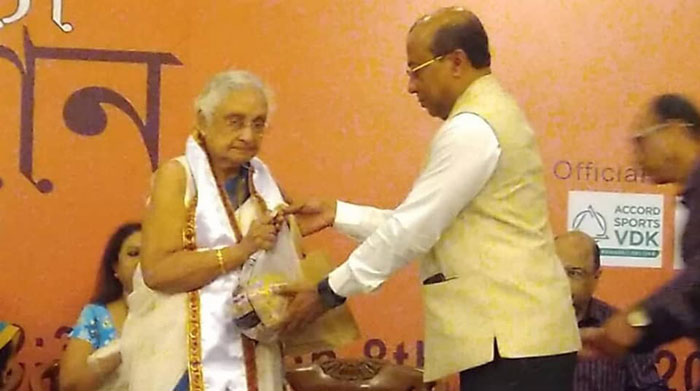 05.03.2021 : Press Release BBFS : Bhaichung Bhutia Football School (BBFS) Residential Academy, a flagship initiative of Bhaichung Bhutia Football Schools (BBFS), announcedthat it will be conducting trials to admissions for year 2021 at Delhi NCR as well as Chandigarh this Sunday. These will be among the first of many cities where the trials will be held onSunday, 7th of March, 2021.The admissions to the residential academy will be open only for players born between 2004& 2010, and selected players will get a chance to be admitted into the academy at a nominal fee, where they will not only getCBSE schooling but also football coaching from licensed coachesvia the integrated football training program . 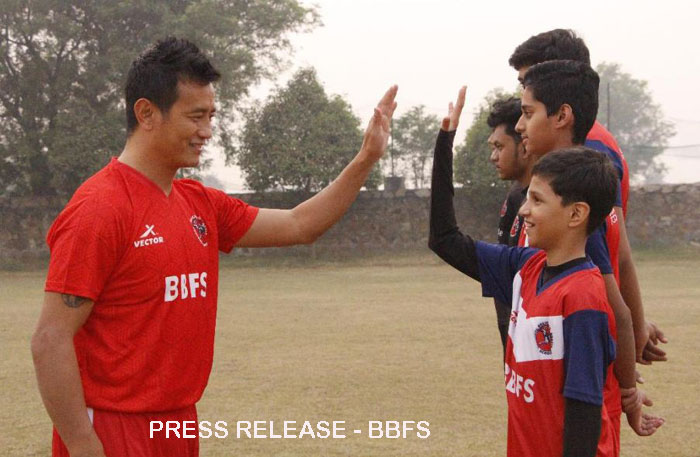 As local sporting activities & competitions resume in India, this would be the first time after almost a year that BBFS would be organizing trials for admissions to its residential program, as the on-field activities had to be suspended temporarilydue to Covid-19 last year.It comes at a time when the academy has successfully created a bio-secure campus, so that can continue to train in a safe environment.

Being a top-tier football academy in India, BBFS Residential Academy primarily provides the opportunity for talented young football players to pursue their academics while receiving the best-in-class football training. The benefits of a Residential Academy go beyond just the combination of education and training, but also looks into several other aspects that are crucial for a budding player’s development, includingdiet, definitive competitive exposure and career guidance. 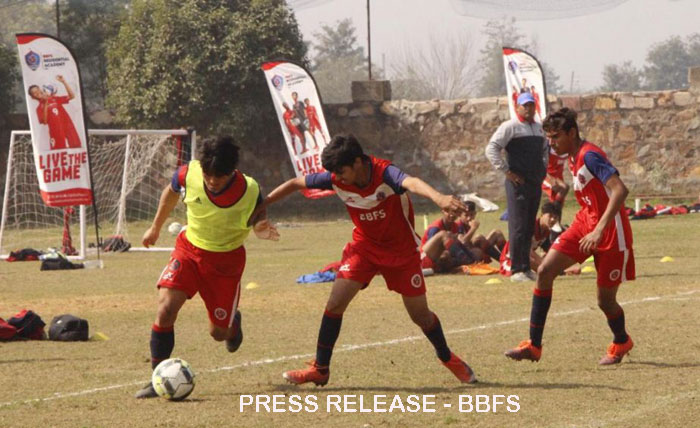 While many schools in the country are on the fence regarding resuming day-to-day operations, BBFS Residential Academy has devised a model and created a bio-secure campus wherein the students will be able to play and practice the sport they love without having to worry about the pandemic. Presently, around 120 players are training at the Residential Academy, and more are expected to join to start progressing towards their dreams of making it as professional football players.

The management at the academy believe that with the right safety measures in place, players do not have to be denied theopportunity to play, learn and master the beautiful game, and realize their full potential.

05.03.2021 : Press Release : The new set of jerseys which will be donned by the players of Sanju Football Academy, Sombaria in the upcoming season was launched by Mr M.N. Sherpa, Minister of Power & Labour Department, Government of Sikkim on Saturday. CLC President, Sikkim Krantikari Morcha, Mr Tika Hang Subba was also present during the program. 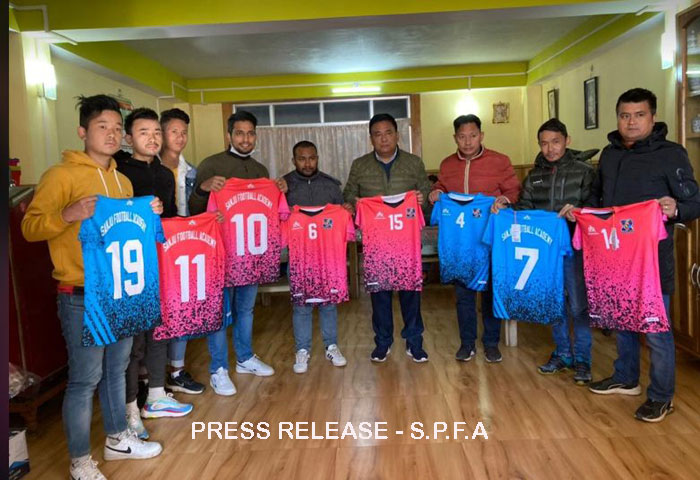 The Jerseys along with rest of kits is designed and manufactured by Ambition Sportswear, a Kolkata based company, which has been producing top quality products since it's inception in 2007.

"I am very happy to see sponsors coming in for Sanju Football Academy and credit goes to Sanju Pradhan who himself is from the remotest part of sikkim and with sheer dedication and determination, he is able to reach the highest level an individual can reach. I also personally thank, Ambition Sportswear for sponsoring the jerseys along with other kits for the Academy". Said Minister Mr MN Sherpa. 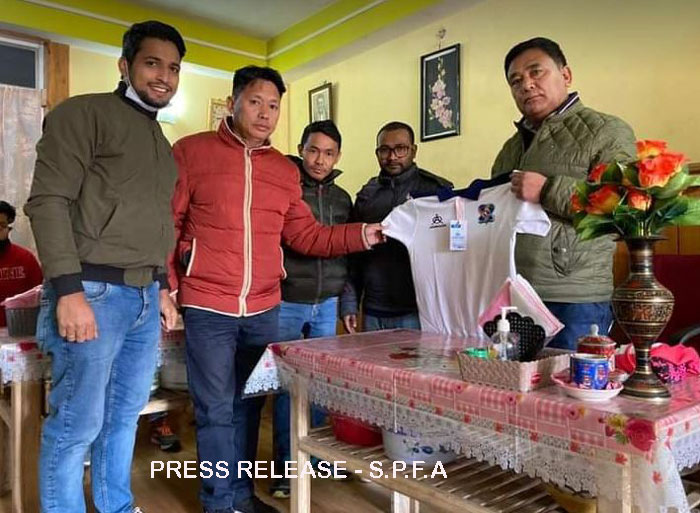 Indian International footballer Sanju Pradhan who is the brainchild and mentor of the Academy was unable attend the function due to his club commitments. So he sent a message from Kolkata- "I am very grateful to Hon'ble Minister, MN Sherpa Sir who gave us time from his busy schedule and launched the Jerseys. I also want to thank Ambition Sportswear for being our Kit Partner and supplying us with top quality kits" said Sanju Pradhan in the note.

Towards end of the function, executive members and players of Sanju Football Academy offered their gratitude to the minister for his kind gesture of launching the jerseys and his words of encouragement.

1.3.21: ATK Mohun Bagan will play their Group stage matches of AFC Cup 2021 in Male, Maldives. This was announced by Asian Football Confederation at Kuala Lumpur on Monday. AFC Cup is a second tier club competition which will be played at a centralised venue following the pandemic caused by COVID-19.

The venues were finalised following an extensive bidding process and after close consultation with its Participating Member Associations.

In the South Zone, the matches in Group D, which include ATK Mohun Bagan (INDIA), Bashundhara Kings (BANGLADESH), Maziya Sports & Recreation (MALDIVES) and the winner of the South Zone Play-off, will be hosted in Male, Maldives.

The other venues of AFC CUP 2021 Group stages are:

GROUP F: TAJIKISTAN - Group F, which include FC Alay (KAGASZISTAN), Altyn Asyr FC (TURKKMENISTAN), FC Khujand (TAJAKISTAN) and the representative of Uzbekistan, AGMK FC or FC Nasaf, which will be decided after the AFC Champions League 2021 Play-off match.
GROUP G: YET TO DECLARE

GROUP H&I: SINGAPORE- In the ASEAN Zone, Singapore has been confirmed as the host for Group H, which comprises Kedah Darul Aman (MAS), Lion City Sailors (SIN), Saigon (VIE) and the ASEAN Zone Play-off 2 winner as well as Group I which include Geylang International FC (SIN), Kaya FC-Iloilo (PHI), Terengganu FC (MAS) and the representative of Myanmar, Shan United FC or Ayeyawady United FC, depending on the results of the AFC Champions League 2021 Preliminary and Play-off Stage matches. The venue for Group G, also in the ASEAN Zone will be decided at a later date.