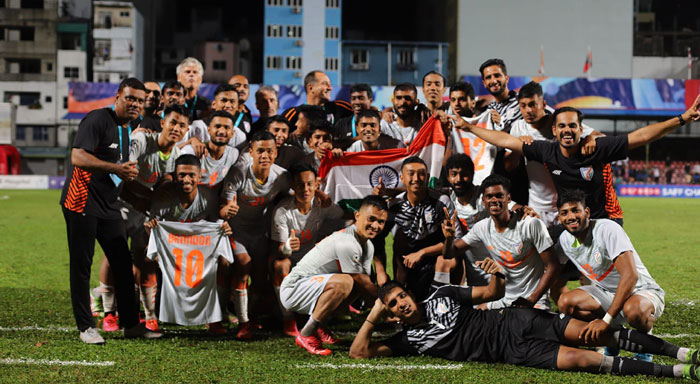 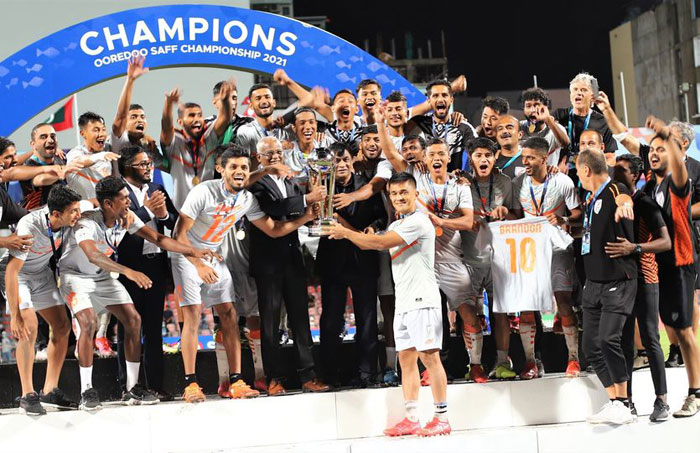 INDIA WIN SAFF CUP FOR THE EIGHTH TIME
76': Chance for Nepal.......Rohit's header of the free kick hit the bar after bearting Gurpreet.
75': INDIA 2-0 NEPAL
74': A good move by Nepal down the middle but finally the powerful shot from Ayush went wide of the target.
70': A cross from Mander to Chetri but Ananta cleared the ball over the touch line.
67': Chetri was looking dangerous inside the Nepal half, he got past two defenders but his left footed shot saved by Kiran.
65': REPLACEMENT NEPAL: Sunil Bal in, Suman Lama out.
64': India are dominating but Nepal had some good counter moves, but yet to create any openings.
60': INDIA 2-0 NEPAL
59': A counter move by Nepal.....Nawayug's powerful shot saved by Gurpreet.
58': REPLACEMENT NEPAL Ayush Ghalan in, Sujal Shrestha out.
58': REPLACEMENT NEPAL: Manish Dangi in , Suman Aryal out.
57': Chance for India again........A good cross from Yasir but Kiran came out in time to collect the ball.
56': YELLOW CARD to Tamang, rough play against Ralte.
53': A cross from Aniruddh from the right but Kiran came out in time before Pritam could reach.
50': GOOOOOAAAALLLL India scored again, leading 2-0. Unmarked Suresh Singh places at the far corner of a pass from Ralte.
48': GOOOOOAAAALLLL India leading 1-0. A cross from Pritam from the right and Sunil's header finds the target.
46': India starts the second session.
HALF TIME SCORE: INDIA 0-0 NEPAL
45+1': Referee blew the whistle for half time.
45': 1 minute added time. 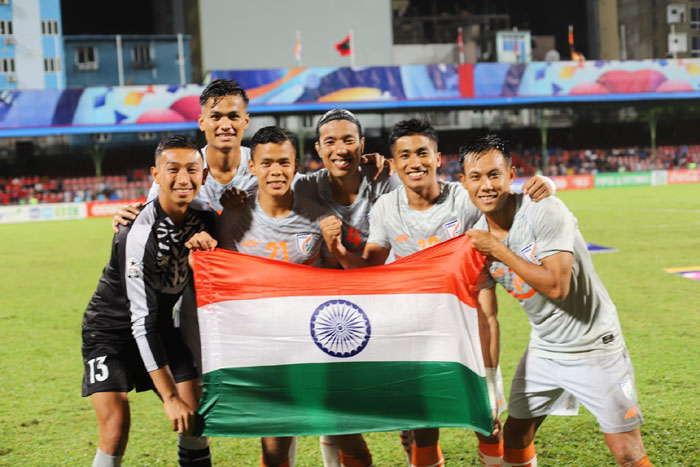 INDIA WIN SAFF CUP FOR THE EIGHTH TIME
42': Chetri missed a easy chance.......The Indian captain shoots wide from inside the six yards of a cross from Pritam.
39': Bheke failed to trap the free kick from Pritam ball cleared by Nepalese defense.
38': India earned a free kick deep inside the Nepalese half as Pritam was fouled by Sujan.
35': A cross from Manvir from the left, Sunil was waiting for the ball but Kiran punched the ball away.
33': A cross from Aniruddh from the left of a pass from Chetri, but it was easily collected by Kiran.
30': INDIA 0-0 NEPAL
28': The ground condition is heavy as it is raining heavily since last twenty minutes.
26': A left footed shot by Chetri os a pass from Aniruddh, but Kiran collects the ball effortlessly.
23': A curling cross from Yasir from the left but Kiran punched the ball away and save the situation.
20': Manvir was inside the 18 yards of a forward pass fro Pritam but he was denied by the Nepalese defense.
17': Rohit slipped inside the 18 yards failed to connect a cross from the right by Nawayug as Gurpreet was just in front of him.
15': INDIA 0-0 NEPAL
13': IT IS RAINING HEAVILY AT MALE.
12': A cross from Pritam to Manvir but Ananta cleared the ball out of the danger zone.
10': A long lob by Pritam inside the 18 yards of Nepal for Chetri but Kiran came out in time to collect the ball.
7': YELLOW CARD to Ralte commited a foul against Nawayug.
6': A move by Nepal deep inside the Indian half but Nawayug fouls Gurpreet.
3': A chance for India......Aniruddh finds a ball after Sunil's shot defected of Kiran, but Nepalese goalkeeper Kiran collects the ball in second attempt and save his team.
1': Sunil failed to control a forward pass from Manvir, Kiran collects.
0': Nepal kicks off in the SAFF final. 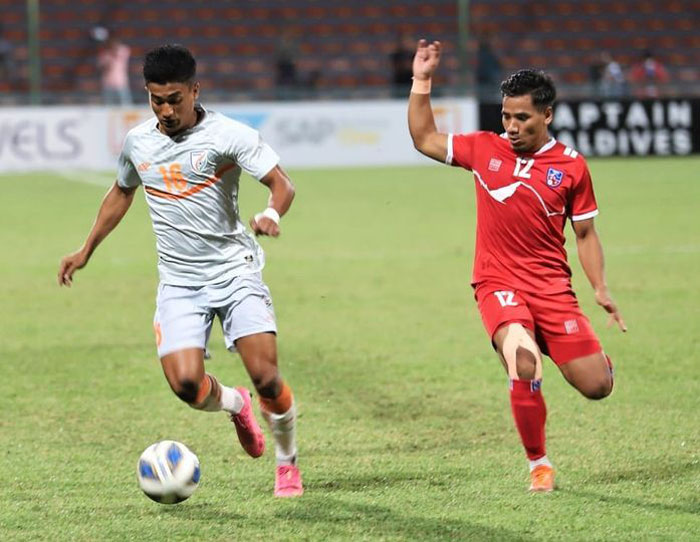 INDIA WIN SAFF CUP FOR THE EIGHTH TIME
OUR JOB IS NOT OVER: CHETRI, WE ARE NOT OVER CONFIDENT: STIMAC
15.10.21: India is all set face Nepal in the final of the SAFF football championship 2001 at the National stadium, Male on Saturday night. This is India's 12th entry in the final out of the 13th edition of the competetion played so far.

India had a subdued start when they drew against SriLanka and Bangladesh in the first two matches. But came back strongly against Nepal and Maldives and won against Nepal(1-0), and Maldives(3-1) respectively. Sunil Chetri scored the decisive and important goals in the both the matches which helped India to reach the final.

Indian played three matches against Nepal in the recent past. India drew one and won two matches but Indian Captain Sunil Chetri cautioned his team mates that job is not yet done. In an intervew with the AIFF media, Indian captain said, "They may not have an extraordinary player in their ranks like an Ali Ashfaq in their ranks. But as far as attacking and defending are concerned, they do it as a team.

They have been the best team that plays as a team in this Championship – they fight as a team. We have played them thrice since September and they are extremely compact as a team and it’s not going to be easy. But we have become better and better as games have gone by, and in the final we have to be at our best. We pulled our socks up after the first two games and now it is time to finish the job."

While Head coach of India, Igor Stimac in the pre match interview said, "We are not allowing complacency to step in. We are aware of what we need to do. There is a very tiny line between being confident and overconfident and I am keeping a close eye that we don’t cross that line. We are rising as a group, as a team and as a big family playing better football with every given day. We have to be patient, keep working hard and be confident. Nepal are a known opponent to us, as much we are to them. We take confidence in having won the last two matches. But I reiterate, we are not overconfident,”

India will miss two important footballers in the final. Faruk Chowdhury who played a good role in the upfront, are already out of the tournament following an ACL injury and defender Subhasish Bose was sent of the ground in the last match against Maldives. 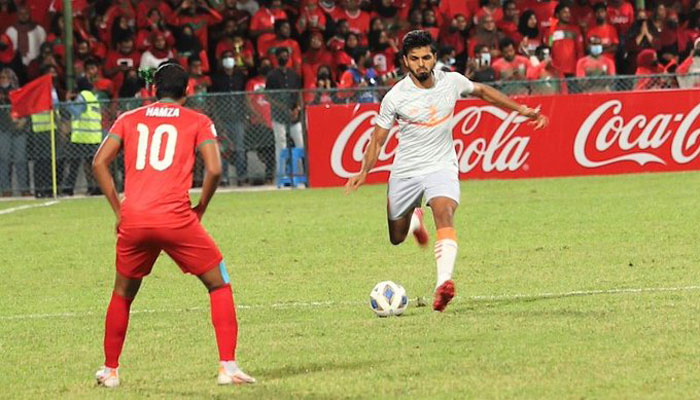 FINAL RESULT: INDIA 3-1 MALDIVES
India entered the final of the SAFF Championship defeating Maldives by a margin of 3-1 at the last match of the Group League.They will play against Nepal in the final on the 17th October. Subasish Bose was sent off the ground at the added time of the match. His second Yellow Card and will miss the final against Nepal.

India continuing their attack did not giving away anything to Maldives even at the final stage of the match. INDIAN HEAD COACH IGOR STIMAC SENT OFF THE GROUND FOLLOWING HIS SECOND YELLOW CARD OF THE MATCH AT THE 80TH MINUTE. It is now an uphill task for Maldives at the 79th minute of the match. They have to wipe of a deficit of two goals in order to came back in the match. 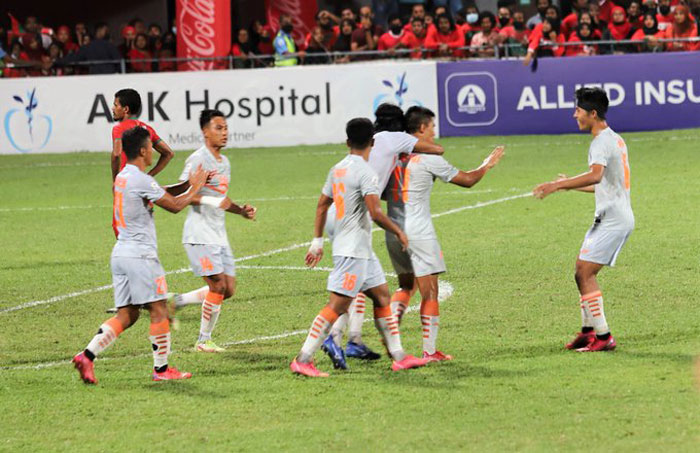 India are now leading by 3-1 at the71st minute of the match. Thanks to Indian captain Sunil Chetri who scored of a beautiful angular header of a free kick from Pritam from the midfield. India got the lead once again at the 61st minute of the match. Chetri's powerful shot of a pass from Manvir inside the 18 yards finds the target. Ali Ashfaq was looking dangerous of a counter move. He got past two Indian defenders but finally challenged by Pritam at the 58th minute of the match.

INDIAN HEAD COACH IGOR STIMAC CAUTIONED BY THE REFEREE AT THE 53RD MINUTE OF THE MATCH.
AT HALF TIME: INDIA 1-1 MALDIVES It was an eventful first half as both the teams scored each. India had the lead but Maldives equalised when Pritam Kotal fouled inside the danger zone. Maldives earned a penalty at the 43rd minute when Pritam tripped Hamzath from behind inside the 18 yards. Ali Ashfaq convets with Gurpreet had no answer to respond.

India got the lead at the 32nd minute of the match when Manvir Singh converted an measured forward pass from Sunil from the midfield. Manvir's shot from inside the 18 yards beat on rushing Faisal. At the 28th minute Ali Ashfaq was once again in an open space with Gurpreet infront of him of a counter move but his shot hit Subasish and went over the touch line.

At the 26th minute India was unlucky when Sunil's header of a free kick from Brandon from the left hit the bar and finally cleared by the central defense of Maldives. Ali Ashfaq finds himself in an open space deep inside the Indian half at the 8th minute of the match, but Bheke was prompt enough to save the situation. 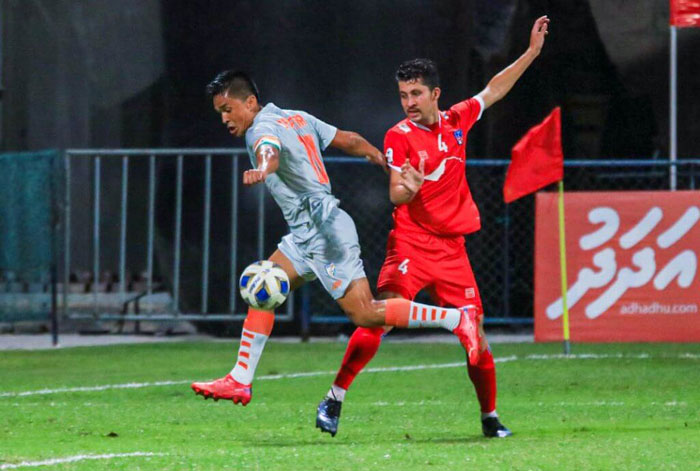 INDIA BEAT NEPAL 1-0. With this win now India moved to the third position. India are now at 5 points with two draw and one win. Sunil Chetri scored the all important goal at the 82nd minute of the match after wasted easy opportunities in the second session.A brillant save by Kiran Limbu at the 57th minute of the match. A header from Manvir of a cross from Yasir from the right was denied by Kiran as he dives to his left. The Blue Tigers will play their final Group Stage game against hosts Maldives on Wednesday, October 13, 2021, at the same venue. The match kicks off at 9.30 PM IST

Chetri missed another easy chance at the 76th minute of the match. A long lob by Rahul Bheke was defected of the Nepalese defense and went to unmarked Chetri. But the Indian captains header went straight to Kiran Limbu. India lost a chance again at the 80th minute. Sunil Chetri's header of a croner from Brandon hit the ground and went over the post.

Finally Sunil Cherti gave the lead to India at the 82nd minute of the match. A header from substitute Faruk Chowdhury finds Chetri inside the danger area. Chetri's push beat Kiran Limbu and went inside the goal. Nepal created pressure in Indian defense at the flag end of the match but unable to disturb Indian defense and goalkeeper. 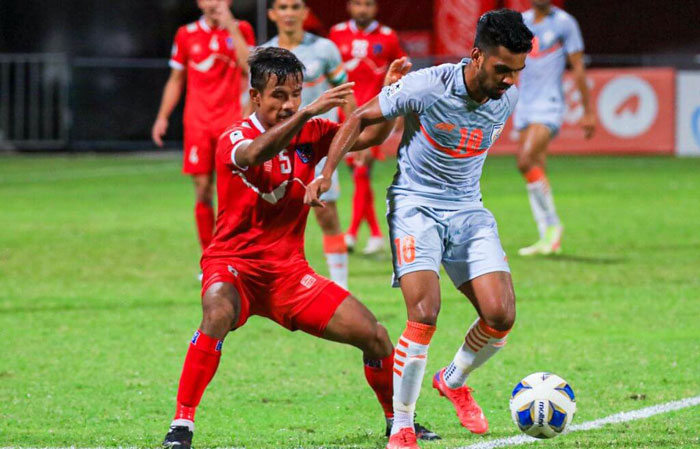 FIRST HALF: The first half ended in goalless as neither of the teams could score. India dominated the first session initiated some good moves but failed to convert from the close range.India missed a golden opportunity at the 33rd minute of the match when Sunil Chetri failed to push the ball in an absolutely open goal within the 6 yards of a pass from Brandon. The Nepalese goalkeeper Kiran Limbu failed to collect the cross from Brandon from the right flank.

Manvir Singh had a chance at the 43rd minute of a headed from Chetri, but he failed to control the ball as Rohit Chad challenged Manvir and the ball finally collected by Kiran Limbu. Nepal relied on some counter moves but did not create any chance to score. 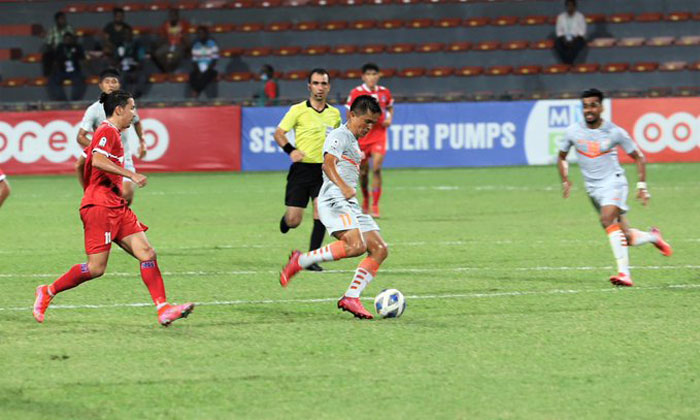 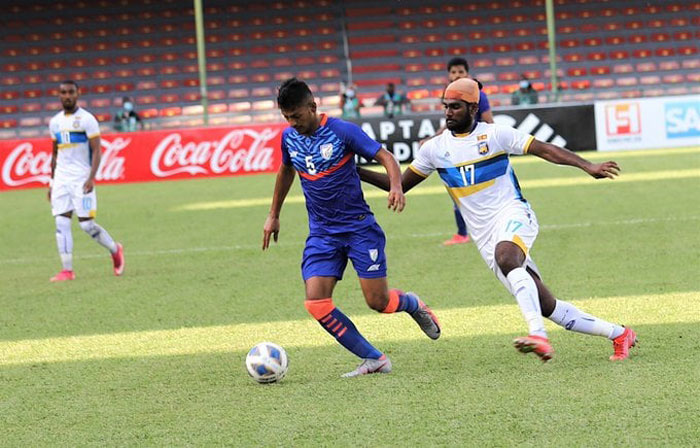 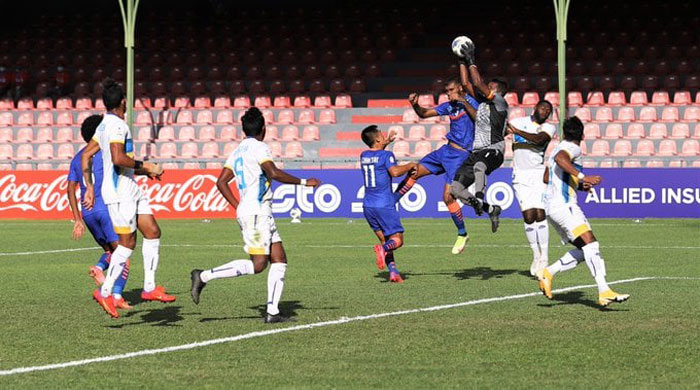 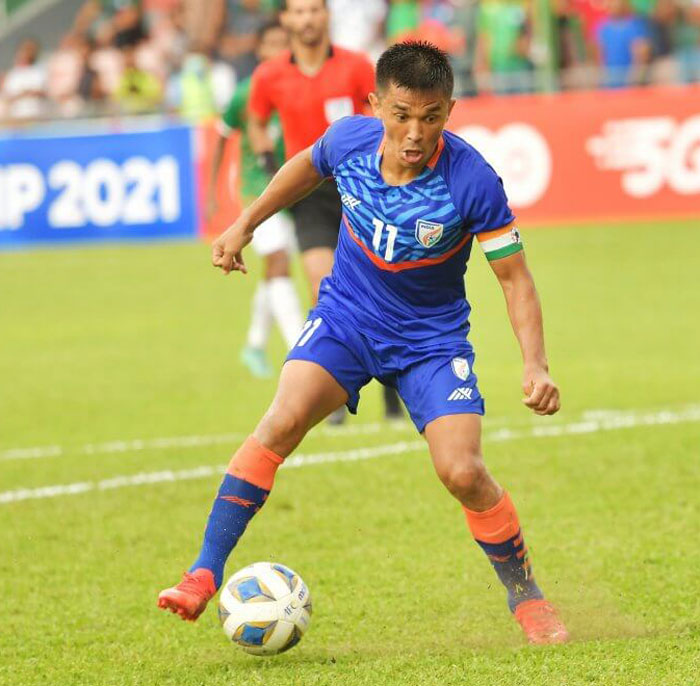 GOAL - INDIA : Sunil Chhetri broke the deadlock in the 27th minute, as he smashed a cut-back by Udanta Singh from the right, and sent it crashing into the back of the Bangladesh net. This was the talismanic striker’s 76th goal in International Football.

GOAL - BANGLADESH :With a little over 15 minutes left, Yeasin Arafat levelled the score for Bangladesh, heading a Jamal Bhuyan corner into the Indian goal.