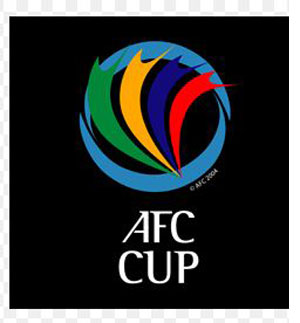 FINAL SCORE : ATK MOHUN BAGAN 0-6 FC NASAF
90+3': Referee blew the final whistle.
90': 3 minutes added time.
88': REPLACEMENT ATKMB: Kauko out, Abhishek in .
87': REPLACEMENT ATKMB: Kiyan in , Willams out.
THIS IS SECOND OCCASION WHEN GOALKEEPER OF FC NASAF RECIEVES A BALL
84': A cross from the right by Liston but no ATKMB footballer were there.
81': Chance for Sardor Sadullaev, but he was blocked by Subhasish.
BIGGEST MARGIN DEFEAT IN INTERNATIONAL FOOTBALL: IN 8TH NOVEMBER, 1999 MOHUN BAGAN LOST AGAINST J LEAGUE SIDE JUBILO IWATA IN ASIAN CUP BY A MARGIN OF 8-0 IN A SECOND ROUND TIE
79': YELLOW CARD: Sardor Sadullaev of Nasaf for rough play.
77': REPLACEMENT NASAF: Golib Gaybullaev in Oybek Bozorov out.
76': REPLACEMENT NASAF: Sardor Sadullaev in Umar Eshmuradov out.
74': Liston's shot of a pass from Willams went wide. 48': A good effort by Borozov, his shot missed the target.
46': REPLACEMENT ATKMB: Liston in, Shahil out.
46': REPLACEMENT NASAF : Andrija Kaludjerovic in Khusain Norchaev out.
46': Second session starts.
ATK MOHUN BAGAN 0-5 FC NASAF
45+3': Referee blew the whistle for half time.
45+1": GOAL . FC Nasaf scored the 5th goal. Bozorov scored of a forward pass from Dilshod Saitov.
45': 3 minutes added time.
42': Penalty missed by Oybek Bozorov, his shot hit the bar.
41': PENALTY for Nasaf, Bakhrom was brought down by Pritam.
40': Oybek Bozorov shot from inside the 18 yards went wide.
37': A combined move by Nasaf but Lenny cleared the ball to safety.

33': A cross from the right by Willams went straight to Nasaf goalkeeper.
Khusain Norchaev scored Hatrik within a very short time in an important match against ATKMB.
31': GOAL Khusain Norchaev scored the forth goal.He push of a forward pass from Akmal Mozgovoy finds the target.
30': ATKMB surrendered to FC Nasaf had no answer how to control the quick attacks.
26': YELLOW CARD to Subhasish for rough play.
24': Chance for FC Nasaf, Khusain Norchaev failed to touch the ball. ATKMB defense had no answer once again.
20': GOAL FC Nasaf Leading 3-0.Khusain Norchaev scored his second goal of a defection. ATKMB defense was a spectator, had no answer to respond..
18': GOAL . FC Nasaf scored the second goal. Norchaev scored of a pass from the left by Sherzod Nasrullae . 13': A move by Bozorov from the left cleared by Ashutosh out of the danger zone.
11': A long forward pass by Kauko,but Krishna was blocked by Nasaf defenders.
9': A quick attack from the right by Nasaf just missed the target.
6': A cross from Manvir of a pass from Kauko from the right cleared by Nasaf defense.
4': GOAL Nasaf leading..Norchaev corner headed by Carl Mchugh in his own goal. Ball defected of Pritam before
2': A quick attack from Bakhrom, but his shot went to Amrinder.
0': Match started .

WE WILL GIVE HUNDRED PERCENT FOR PROMISING RESULT: ANTONIO HABAS
21.9.21: ATK Mohun Bagan had a practice session on Monday evening after reaching Qarshi from Tashkent two hours late due to delayed flight. The Spanish coach Antonio Habas insisted on physical training and positional football as there was no provision or opportunity for closed-door practice. ATK Mohun bagan will play against FC Nasaf on the 22nd of September in the AFC Cup inter zonal semifinal.

The Head coach of ATK Mohun Bagan, Antonio Habas talked to the club media before the AFC Cup match. He said, No coach in the world can guarantee 'victory'. Our preparation in Dubai has been quite good. We are optimistic about winning. We also have in our mind that our opponent is a strong team but we have the power to defeat Nasaf.

Regarding his opornant FC Nasaf, Antonio Habas said, "They perform well in competitive tournaments. They are quite strong as a competitor. Like us, they have footballers who can change the colour of the match in no time.

While he was discussing regarding the stategy, Antonio Habas said, "Not just wing play, but many factors are there. We have to try to open the mouth of the goal by creating space for the defense of the opponent. For that, we will do everything that needs to be done."

The Spanish coach included some important footballers in the match against FC Nasaf. As he said, "Footballers have to be ready to give their best in any environment. Kauko has already adapted himself to the team. He is a great footballer. Prabir and Soosairaj are both very important footballers. They are also ready. I have not yet decided how long I will keep them on the field. The reason being that they have not been in a competitive match for a long time. I have to choose the first XI considering all the aspects."

Antonio Habas is satisfied with the environment and atmosphere of Qarshi. Though it is hot in the day time but tempereture falls in the evening and it is comfortable to play a good football match. ATK MOHUN BAGAN QUALIFIED IN THE INTER ZONAL ROUND
Principal Owner ATK Mohun Bagan Sanjiv Goenka's massage:
Very pleased with ATK Mohun Bagans performance in the AFC Cup . Delighted that they have qualified for the knock out stage . A big thank you to all the players , the coach , everyone did a phenomenal job under difficult circumstances . A big thanks to all the fans for their unstinted support .

FULL TIME SCORE: ATKMB 1-1 BASUNDHARA KINGS
90+5': Referee blew the final whistle.
90+3': REPLACEMENT ATKMB Deepak out, Sk Sahil in
90': 5 minutes added time.
89': Subasish handled the ball inside the 18 yards......over looked by Referee.
87': A POINT IS REQUIRED FOR ATKMB TO QUALIFY FOR THE INTER ZONAL ROUND.
85': Manvir's shot of a pass from Colaco missed the target .
84': Robson header hit the post after beating Amrinder........ATKMB survived.
82': A powerful grounder by Robson, Amrinder collects the ball in second attempt.
80': ATKMB 1-1 BASUNDHARA KINGS
79': YELLOW CARD to Rias for rough play against Deepak.
75': REPLACEMENT BASUNDHARA Biswanath out, Ibrahim in. 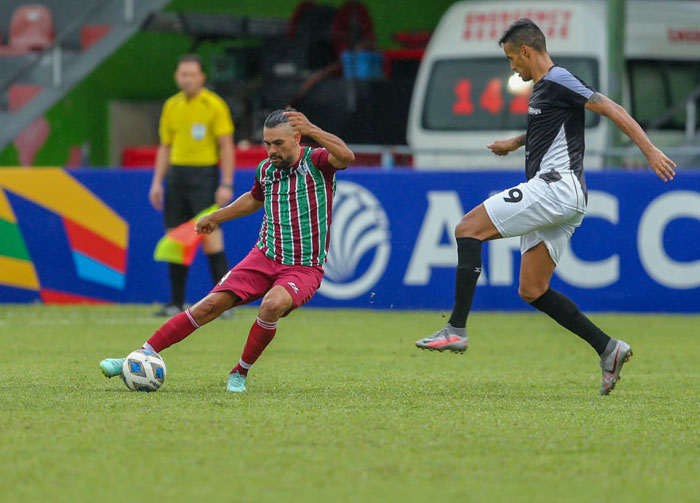 72': ATKMB are attacking in search of a goal, while Basundhara relying on counter attacks.
70': Willams's shot of a pass from Lenny saved by Anisur.
67': A move by Subhasish from the left but Biswanath pulled him down.
65': REPLACEMENT BASUNDHARA Biplab in, Atikur out.
64': Robson's cross from the left went far and wide.
61': GOAL ...............David Willams equalised for ATKMB of a brillant pass from Liston Colaco .
60': ATKMB 0-1 BASUNDHARA KINGS
57': ATKMB are in continuous attack but Basundhara Kings looked confident to control the situation.
55': A cross from Ausotosh from the right cleared by Basundhara defense.
52': A good effort by Colaco but Biswanath cleared the ball out of the danger zone.
50': Zoni's free kick cleared by ATKMB defense.
48': YELLOW CARD to Deepak. He fouled Robson, free kick to Basundhara
47': Free kick for ATKMB.....Willams free kick went straight to Anisur.
46': Second session kicks off.
45+2': HALF TIME SCORE: ATKMB 0-1 BASUNDHARA KINGS
45+1': RED CARD to Sushanth Tripura of Basundhara for rough play against Pritam.
45': 2 minutes added time. 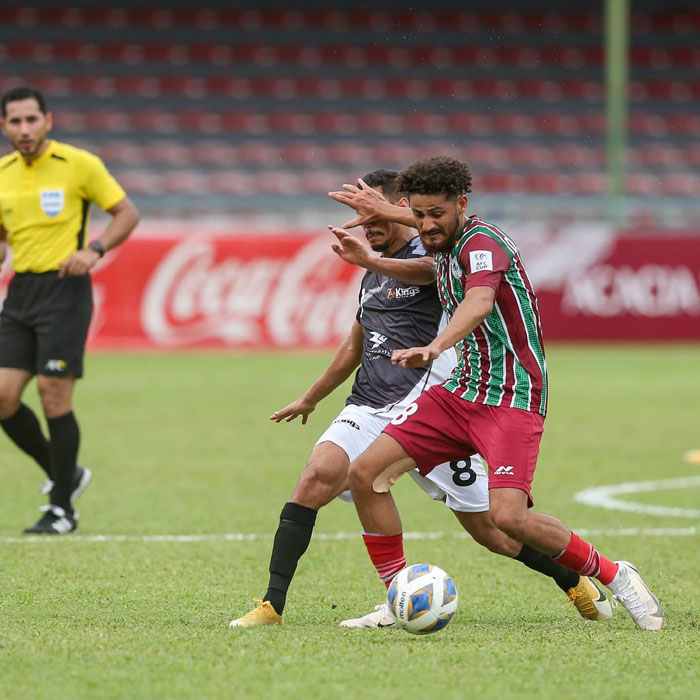 44': YELLOW CARD to Atikur, he pulled down on rushing Manvir.
42': A diving save by Anisur denied a powerful shot from Willams.
39': An effort by Krishna inside the 18 yards but Khalid saved the situation.
38': YELLOW CARD to Zoni for rough play against McHugh.
36': Atikur's free kick cleared by ATKMB defense.
35': Free kick to Basundhara deep inside the ATKMB half, as McHugh handled the ball.
32': Colaco wasted a chance again....hit straight to Anisur of a pass from Ausotosh.
30': ATKMB 0-1 BASUNDHARA KINGS
27': GOAL ...................Basundhara leading, Jonathan Reis's powerful shot from top of the 18 yards beat Amrinder.
24': Free kick for ATKMB just outside the 18 yards. Colaco's shot hit the human wall
23': A brillant effort by Krishna of a pass from Manvir, but missed the target by an inch.
22': A cross pass from the left by Subhasish cleared by Basundhara defense.
19': YELLOW CARD to Biswanath for rough play against Krishna. 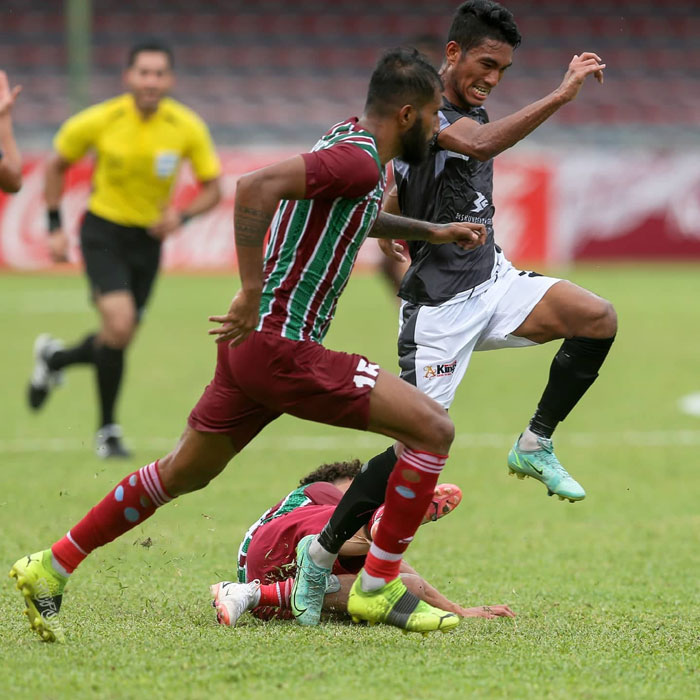 17': A easy chance wasted by Colaco, he failed to convert in open goal of a pass from Willams.
15': ATKMB 0-0 BASUNDHARA KINGS
14': A goal line save by McHugh, he denied Raul to score.
12': YELLOW CARD to Pritam for rough tackle to Tariq.
10': A good move by Colaco inside the 18 yards got past two defenders but finally lost control of the ball.
9': Basundhara playing in short passes inside the ATKMB half.
6': YELLOW CARD to Tariq of Basundhara for rough play against Pritam.
5': Reis's free kick cleared by McHugh.
4': Sushanth was fouled by Colaco, Free kick for Basudhara. 1': A long throw from Ausotosh, cleared by Basundhara defense.
0': Match started at Male, ATKMB kicks off. 69': Maziya are desperate to equalise the goal, had some good moves .
66': Aisham's grounder hit the post. Amrinder had no answer to respond.
64': GOAL ATKMB increased the lead. Roy Krishna scored after a shot from Colaco defected of Maziya goalkeeper.
63': REPLACEMENT ATKMB: Willams out, Boumous in
62': REPLACEMENT ATKMB: SK Sahil in, Deepak out.
61': Willams left footed shot of a pass from Lenny went wide.
60': ATK MOHUN BAGAN 1-1 MAZIYA RC
58': Hamja after got past two ATKMB defender took a prompt shot but Amrinder saved the situation.
55': A good move by Maziya down the middle,but McHugh in control of the situation.
52': A good move by Maziya.... Corneluis shot from top of the 18 yards went wide.
50': Colaco's free kick from the right went wide.
47': GOAL .........ATKMB equalised. Liston Colaco's header of a cross from Ausotosh finds the target.
46': A quick move by Maziya....Hamja's shot missed the target of a pass from Ibrahim.
46': REPLACEMENT ATKMB: Ausotosh in , Sumeet out.
46': Second session starts.
45+1': HALF TIME SCORE: ATK MOHUN BAGAN 0-1 MAZIYA RC
45+1': Referee blew his whistle for half time.
45': 1 minute added time. 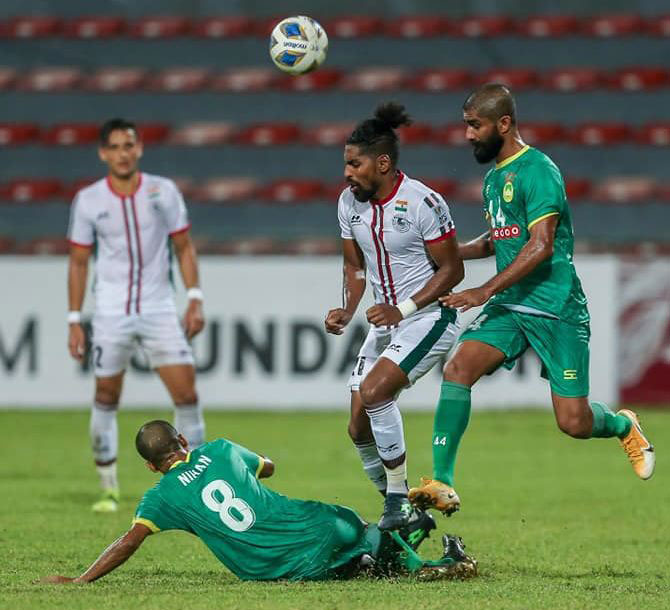 PIC: AFC MEDIA
43': Hamja was blocked by Pritam denied to take a shot at goal.
41': YELLOW CARD to Nihan for rough against Krishna.
ATK MOHUN BAGAN 0-0 MAZIYA RC
39': Colaco shot of a pass from Krishna went over the cross bar.
37': A cross from Ibrahim from the left cleared by McHugh.
35': Colaco had a long run of a forward pass from Lenny, but the ball rolled over the goal line.
33': ATKMB are trailing by a goal yet to create a positive chance to score.
30': ATK MOHUN BAGAN 0-1 MAZIYA RC
30': Colaco's free kick punched away by Mirzokhid.
29': Krishna was fouled by Abdulladeep inside the Maziya half, free kick to ATKMB.
27': A chance for Maziya again.......Hamja's cross from the right went dangerously in front of the goal.
25': GOAL..............Maziya scored, Aisam scored of a pass from Hamza from the right, defenders are not in their position. 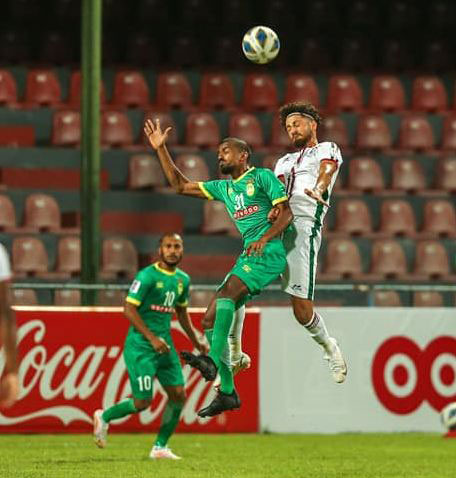 PIC: AFC MEDIA
24': A free kick from Willam, cleared by Maziya defense.
23':Free kick to ATKMB... Coloco brought down by Takashi.
22': A counter move by ATKMB.....Subasish's cross of a pass from Colaco cleared by Maziya defense.
21': Maziya playing in short passes inside the ATKMB defense.
18': Colaco failed to control a pass from Krishna, ball cleared by Maziya defense.
15': ATK MOHUN BAGAN 0-0 MAZIYA RC
14': Mirzokhid saved a shot of Krishna of a cross from Manvir from the right.
11': Pritam's cross from the right of a pass from Colaco went to Majiya's goalkeeper.
8': Amrinder saved a chance for Majiya. Pritam's flick of a corner from Hussain went towards goal .
7': YELLOW CARD to Deepak for rough tackle to Ibharim.
6': Lenny's left footed long ranger went straight to Majiya's goalkeeper 4': Krishna push went inside the goal of a pass from Willams but Referee declared Krishna as off side.
3': A corner by Liston from the right cleared by Blanco.
1': Manvir unable to got past a Maziya defender, ball cleared to safety.
0': Match started at Male, ATKMB kicks off

STAT : This will be the 5th AFC Cup meeting between Indian team ATK Mohun Bagan and Maldivian team Maziya Sports where Maziya won the last 2 matche, lost 1 and drew 1.

STAT : ATK MOHUN BAGAN managed their first clean sheet in 12 Games in AFC CUP in their 2-0 victory over Bengaluru FC in first Game. Once before they have managed to keep 2 clean sheet in the Competition. 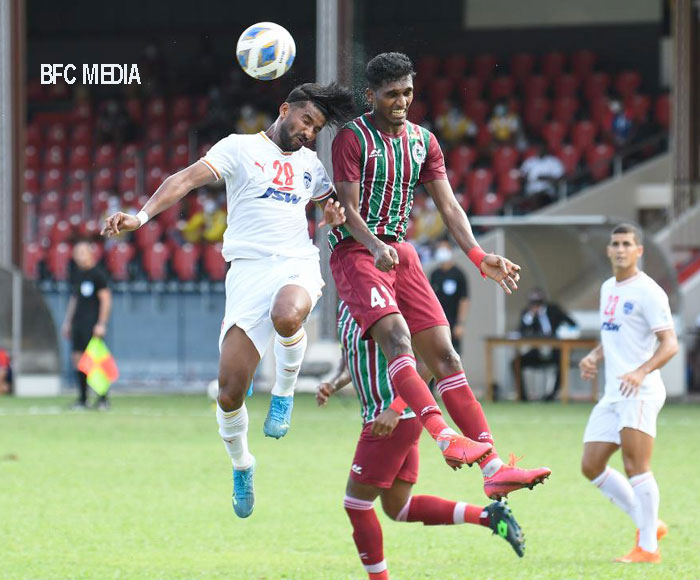