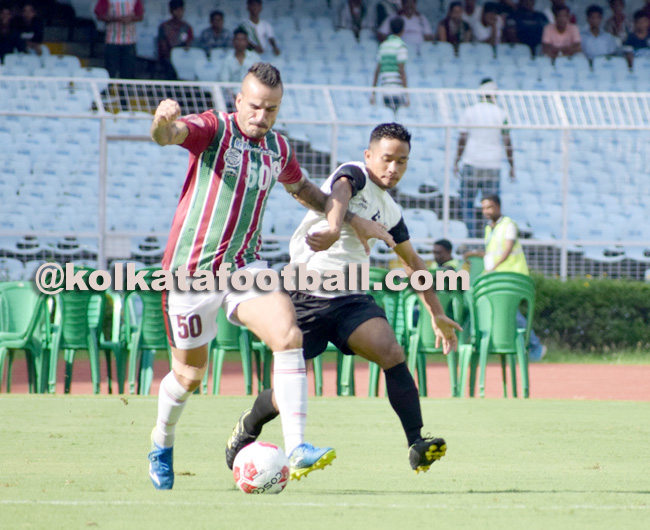 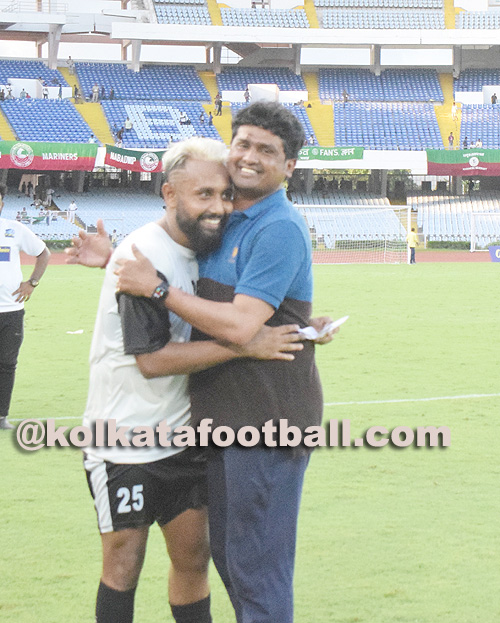 82': Musa's powerful shot defected of Daniel for a corner.
81': Chamoroo's header of a cross pass from Britto saved by Priyant.
79': Back to back three corners for Md Sporting,but unable to utilise the situation.
78': REPLACEMENT MOHUN BAGAN Britto in, Chullova out.
77': Thirthankar's left footed shot of a pass from Satyam saved by Debjit.
74': Beitia's free kick from almost 40 yards collected neatly by Priyant.
AT BARASAT, PEERLESS SC WON BY A MARGIN OF 2-0 AGAINST BHOWANIPUR, MAINTAINING THE POLE POSITION IN THE LEAGUE TABLE.
70': GOAAAALLLLL...... Mohun Bagan reduced the margin, Chamorro's header of a free kick from Beitia beat Priyant.
67': Satyam wasted an easy opportunity.....shoots wide from a close range from a pass from Chidi.
66': Md sporing leading by 3-1, Mohun Bagan had to come back strongly to reduce the margin. 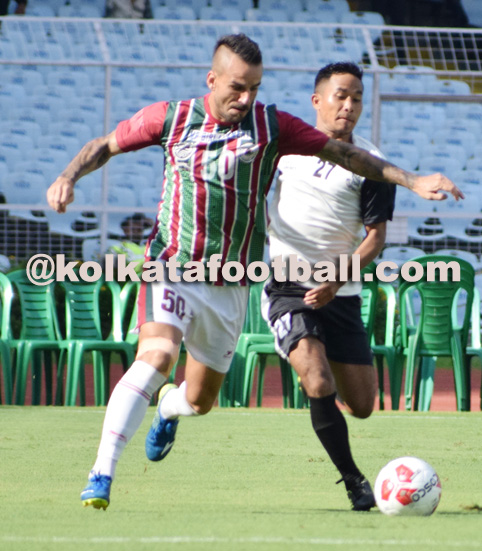 64': REPLACEMENT MOHUN BAGAN Salva in, Gonzalvez out.
61': GOAAAAAAALLLLLL....... Md Sporting increased the lead. Chidi scored of a defection from Mohun Bagan defense.
60': A miss by Changte.....kicks wide from a range with only Debjit to beat.
58': A good block by Daniel denied on rushing Changte.
55': Md Sporting leading by 2-1. Both the teams are playing open game are in search of goal.
53': Beitia's corner from the right cleared by Prosenjit out of the danger zone.
51': Chidi's push was defected by Debjit, Mohun Bagan survived, Chidi was in a clear position to score.
49': Beitia's free kick from outside the 18 yards cleared by Kareem.
48': Changte'a header of a pass from Musa went wide. 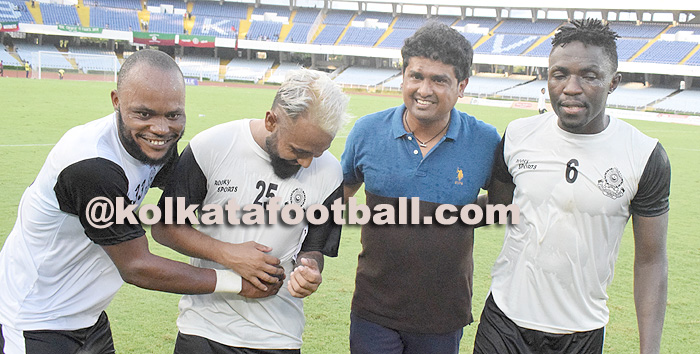 47': A good move down the right by Chidi but blocked by Chullova.
46': REPLACEMENT MOHUN BAGAN Subho in, Jesuraj out.
46': Second session kicks off.
45+4': HALF TIME SCORE: MOHUN BAGAN 1-2 MD SPORTING
45+2': YELLOW CARD to Gurjinder for pulling down Saiful.
45': 4 minutes added time.
44': Changte was blocked by Chullova deep inside the Mohun Bagan half.
42': Tirthankar's left footed shot of a pass from Musa missed the target.
38': Suhair failed to trap a pass from Naorem inside the 18 yards, chance wasted.
35': A corner kick from Beitia from the left cleared by Md Sporting defense.
33': Chance for Md Sporting.....Changte failed to beat Debjit of a pass from Chidi.
31': Match is interestingly poised, as both the teams are playing open game.
29': Kimkima cleared a cross pass from Tirthankar as Chidi was rushing for the ball.
28': Match resumed again.

27': A temporary break due to scorching heat and humid condition.
24': GOAAAALLLLLL....... Mohun Bagan scored. Beitia's curling free kick from almost 25 yards beat Priyant.
23': Mohun Bagan earned a free kick.......Naorem fouled by Saiful.
21': A cross pass from Sujit from the left headed away by Gurjinder out of the danger zone.
19': Mohun Bagan had a series of attacks in the last couple of minutes but unable to create any impact in Md Sporting defense.
16': A move by Suhair down the middle, but a good collection by Priyant .
15': Mohun Bagan in counter attack.....but Prosenjit blocked Suhair confidently.
10': GOAAAAALLLLLL...... Md Sporting increased the lead. Thirtankar scored after covering a long space. His prompt shot from inside the 18 yards beat Debjit.
8': Chance for Md Sporting.......Musa failed to touch a forward pass from Chidi.
7': GOAAAALLLLL....... Md Sporting scored. Kareem scored of a defection of Md Sporing defense of a corner from Changte.
6': A powerful shot by Chidi from age of the 18 yards saved by Debjit.
4': Gonzalvez header of a corner from Beitia cleared by Md Sporting defense.
3': Beitia's free kick cleared by Prosenjit.
1': Match started.

***The CFL table are interestingly poised as Mohun Bagan are placed on 4 position with 14 points, while Md Sporting are on the 5th position with 13 points. Mohun Bagan and Md Sporting are a contender of the tittle. A win would place them in the first two positions in the table.
***Another important match is coming up at Barasat stadium where league leaders Peerless SC will face the challange of the second placed team in the league table Bhawanipur Club. Peerless SC certainly are in an advantegeous position as they had played 7 matches where Bhawanipur had played 8 matches. The points of both the teams are 14. 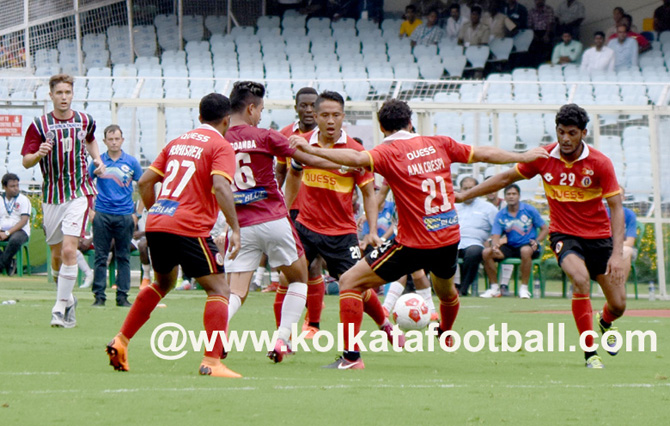 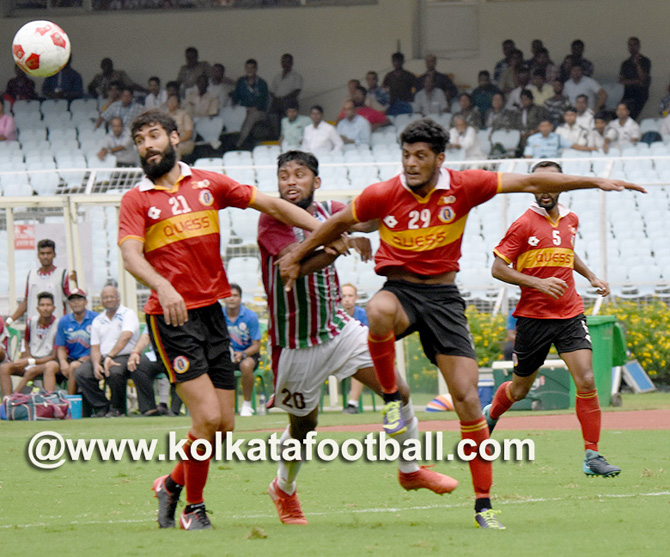 BOTH THE COACHES CLAIMED THEY CAN WIN THE DERBY
KFC NEWS DESK-1.9.19: Mohun Bagan and East Bengal shared points in an equally balanced CFL Derby at Kolkata.The match can be rated as evenly posied as both the teams had some good opportunities to score.

It was quite suprising to see that both the coaches planned their stategy without some regualar footballers. East Bengal coach Alexandro Menendez dropped Jaime Santos Colado and Bidyasagar Singh from the first line up. Coalado and Bidyasagar are scoring regularly for East Bengal in the current CFL. Kibu Vicuna excluded Salvador Perez from the first line up relying on five midfielders right from the start of the match.

While answering to the post match media meeting both the coaches are of the opinion that they can include any footballer in the final eleven. Though Alexandro and Kibu feels that any one can win the Derby as they have some positive chance in their favour during the course of the match. 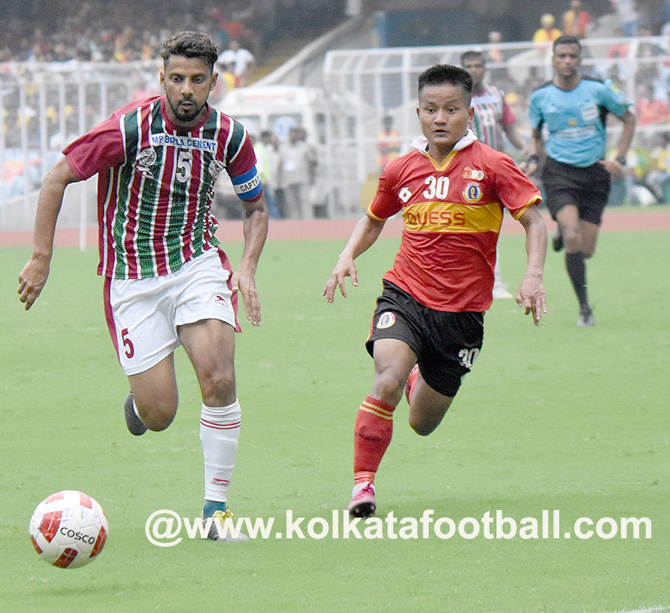 Mohun Bagan dominated completly in the first session could have scored twice but Javier Gonzalez and VP Suhair scored the opportunity from the close distance. Suhair had the easiest opportunity of the match but he shoots straight to East Bengal goal keeper Ralte when he was at his mercy. East Bengal played in a formation of 4-4-2 as compared to the Mohun Bagan's fornmation of 4-5-1. Speaking to the media Alexandro said that my target is to win the game and he played with two strikers from the beginning of the match.But, he is satisfied with the result of the match.

The result of the Derby upsets Kibu Vicuna. Kibu said that Mohun Bagan created positive chances to score in either halfs but it was unfortunate not to convert the chances. He feels that the result should be 1-0 in favour of the Mariners.
It was a tremendous atmosphere in the stadium as supporters of both the teams were in numbers enjoying every minute of the match. The first forty five minutes of the match were dominated by Mohun Bagan but East Bengal came back in the second session strongly. The last years CFL Derby ended in a 2-2 draw this year the Derby failed to yeild result with no goal was scored. 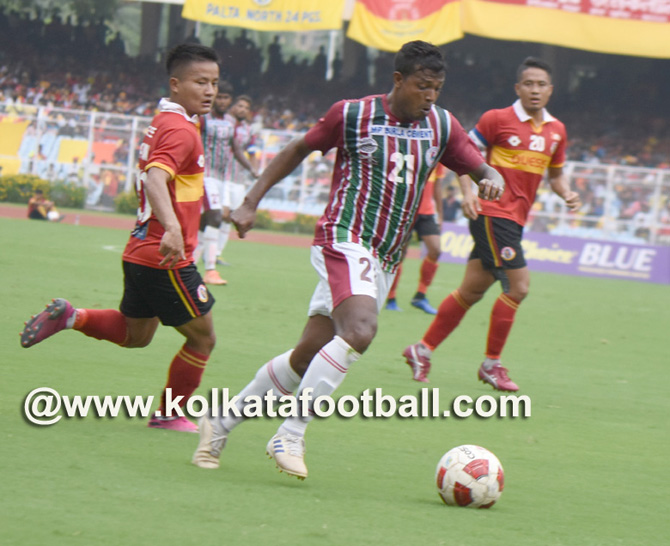 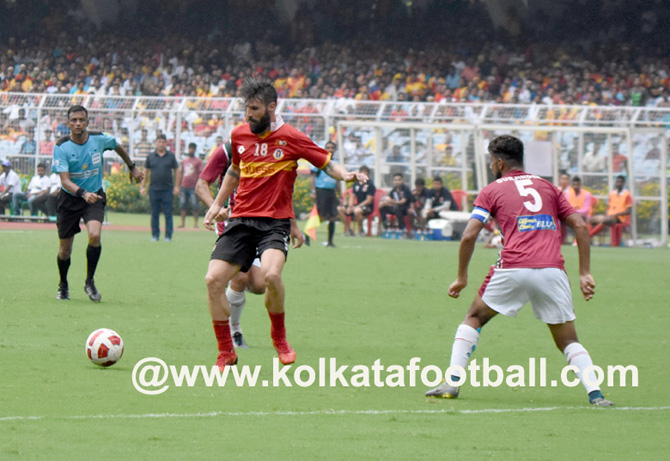 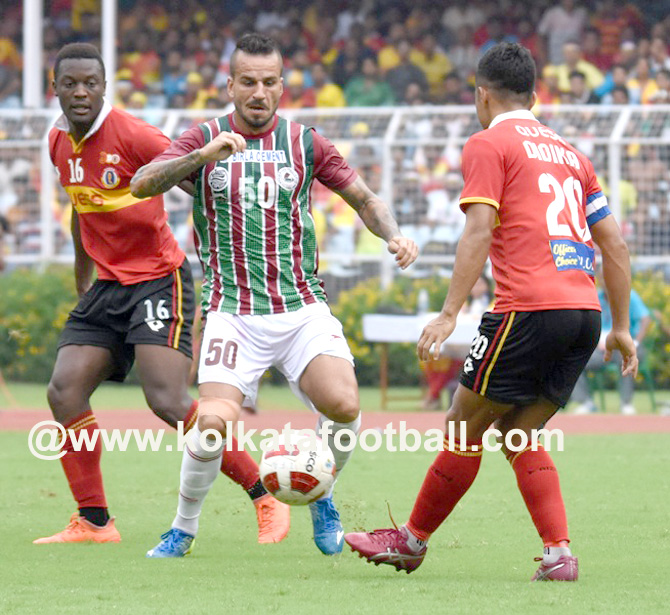 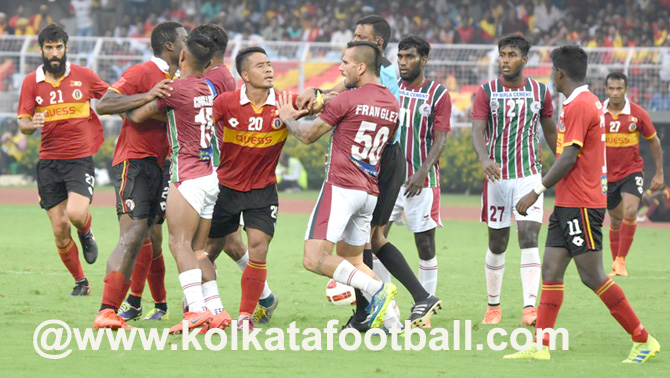 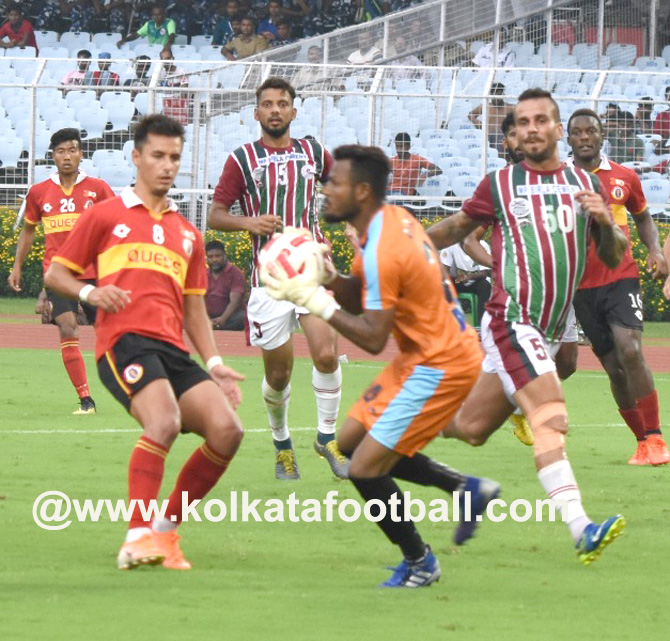 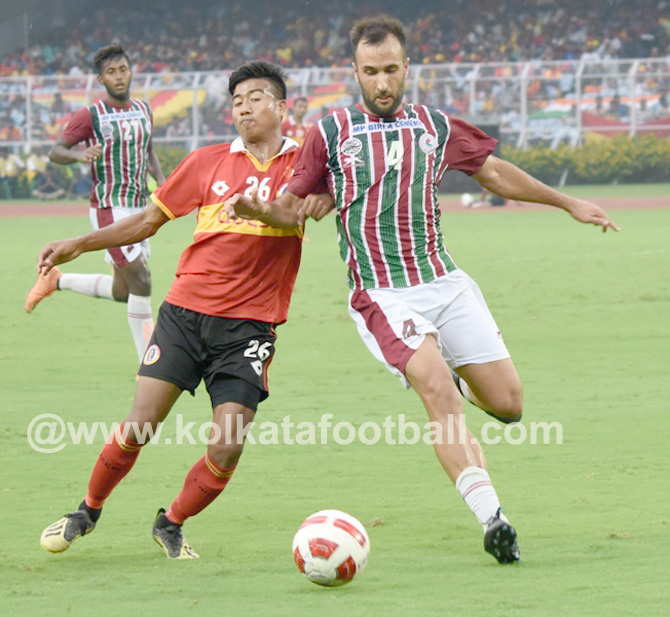 COACHES OPINED THAT MATCH IN AFTERNOON NOT IDEAL FOR GOOD FOOTBALL
KFC NEWS DESK - 30.8.19:The stage is perfectly set for the CFL Derby between the two arch rivals of Indian football East Bengal and Mohun Bagan on the Sunday afternoon at the Vivekananda Yubabharati Kriangan, Kolkata. This will be the 152nd CFL Derby (except 6 walk over matches) where East Bengal won 50 matches and Mohun Bagan won 44 matches, 58 matches failed to yield any results.
02.09.2018: EAST BENGAL 2-2 MOHUN BAGAN (FT)
MB Pintu Mahata (19'), Henry Kisekka (29')
QEB Jonny Acosta (45') , Laldanmaiwa Ralte (61')
This year the CFL Premier A league is a closely contested one. In fact this is one of the rare occasion when neither of these two clubs are in the pole position of the league table before the Derby. East Bengal as well as Mohun Bagan start their CFL campaign miserably when they lost against George Telegraph and Peerless FC respectively.
East Bengal currently placed in the forth position in the league table with 6 points from 3 matches, whereas Mohun Bagan are with 4 points from 3 matches placed in the seventh position in the CFL table. So, a win in the Derby on Sunday evening will definitely help to settle a team in a comfortable position, but it may not be a deciding factor for the tittle.
The match will kick off at 3 pm in the afternoon which is not at all comfortable condition for good football. The climate is hot and humid at this time in Kolkata. Both the coach, Kibu Vicuna of Mohun Bagan and Alejandro Menéndez García of East Bengal are unhappy to play such a tough and high voltage football match at 3 pm in the afternoon. They are in favour of playing the match in the evening. Mohun Baagan coach Kibu Vicuna added that the footballers are the main character of a match, and it is our duty to give them an ideal condition to play the game.
East Bengal coach Alejandro Menéndez García won both the I League Derbies in his first year though he feels past records does not affect at all in such a crucial match. Alejandro are in front of a hatrik on Sunday afternoon. He is confident that his footballers will deliver the best.
Kibu Vicuna incidentally will experience the taste of his first Derby in Kolkata. While interacting he said that is will be a match between 11 versus 11. He is of the opinion that East Bengal's midfield is good, but we will going give them a strong challenge.
It is expected that a full house Yubabharati on Sunday afternoon. The organisers announced that the gate of the stadium will be closed fifteen minutes before the kick off. The match will start at 3pm.

TOSS WITH A GOLD COIN IN DERBY
KFC NEWS DESK-30.8.19: IFA has made several arrangements to make the CFL Derby a memorable one. The toss of the Derby will be done with a gold coin which is donated by Shyam Sunder Jewellery. The same gold coin will be honoued to the Man of the Match finally. The spectators will be covered under a Insurance scheme after their entry inside the stadium. Earlier, East Bengal club implemented the Insurance policy for the spectators for their I League home matches and CFL matches. 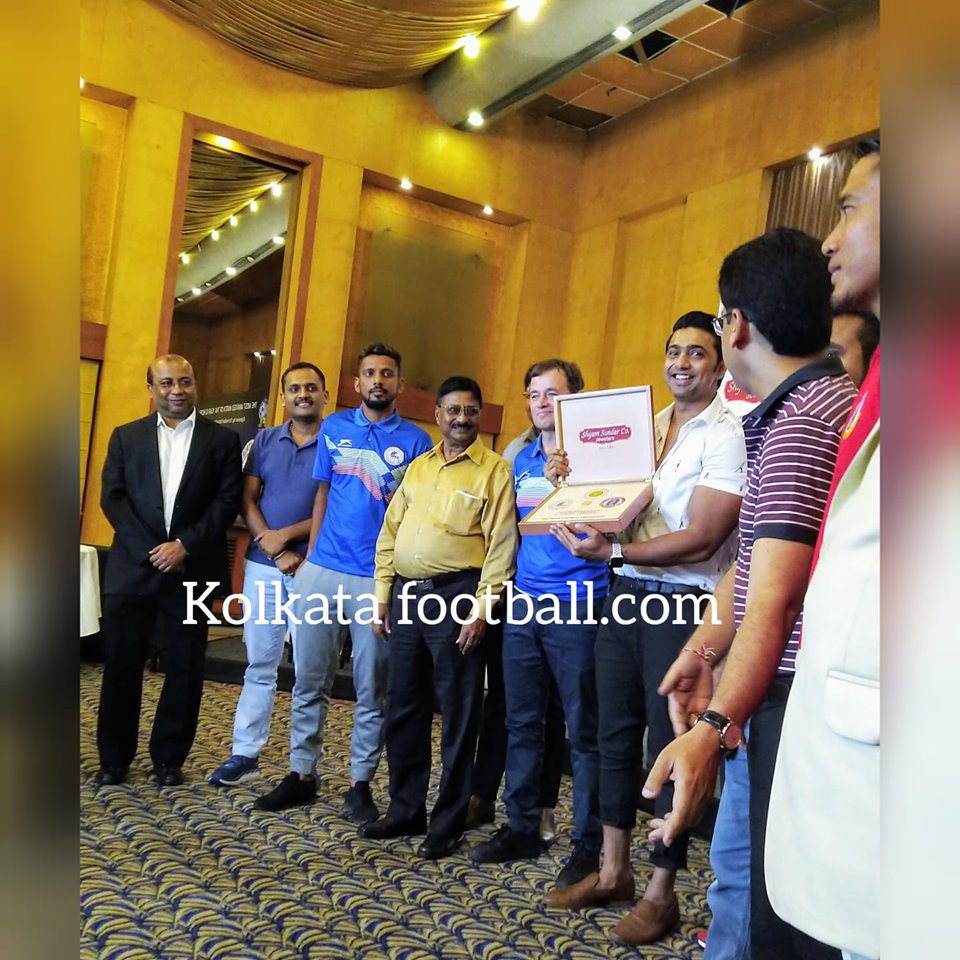 There will be a tight security arrangements during the course of the match within the stadium. The stadium gates will be closed fifteen minutes before the start of the match. The spectators can enter the stadium with their mobile and wallet only. Flags of the either teams can be carried but without any sticks. According to the sources nearly two thousand security personnel will be deputed for the match. The Bidhan Nagar Commissionaire had a detailed discussion with the IFA officials regarding the security of the match.

Meanwhile, the demand for the Derby tickets are increasing. The online processes are already closed since yesterday. Today we find long queue in East Bengal and Mohun Bagan Club ticket counters even at 4pm in the afternoon. The IFA official are expecting a house full Yubabharati on Sunday evening

IFA ANNOUNCED THE CFL DERBY DATE and TICKET PRICE
23.8.19: The IFA CFL Premier A derby between the two arch rivals of Indian football Mohun Bagan and East Bengal will be played on the 1st of September, Sunday at Yubabharati Kriangan, Kolkata. The tickets of the derby will be available online as well as from the selected counters shortly.

IFA is going to adopt a tight security arrangement during the derby inside the stadium. There will be close circuit cameras as well as the security personnel in the stands. It is likely that the gates will be closed fifteen minutes before the kick off for security reasons. The match will start at 3PM.