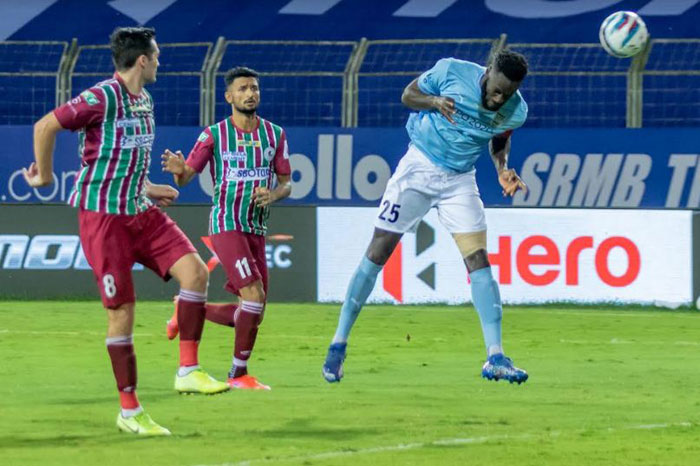 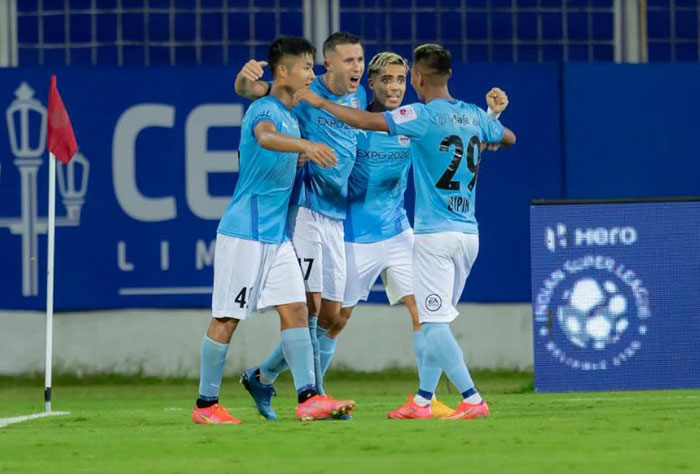 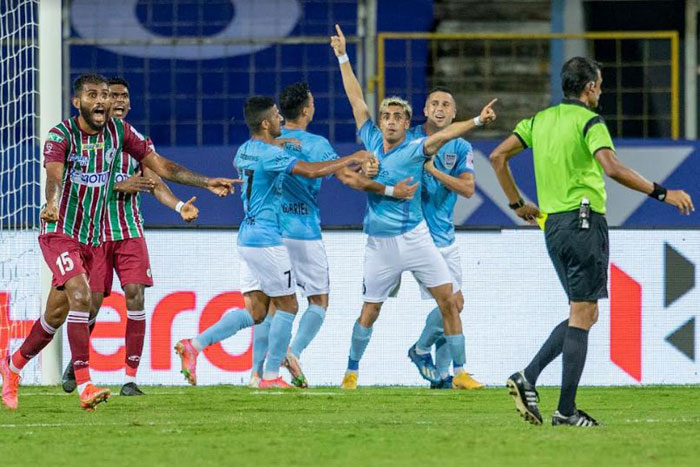 62': YELLOW CARD to Subhasish, rough tackel against Lalengmawia.
60': ATK MOHUN BAGAN 1-5 MUMBAI CITY FC
59': GOALLLLLLL ATKMB scored, a low grounder by Willams of a pass from Joni beat Nawaz.
54': A chance for ATKMB Manvir after covering a long space shoots wide of a pass from Krishna .
52': GOALLLLLLL MCFC scored the fifth goal. Bipin's powerful shot of a pass from ahmed finds the target.
50': ATKMB down to ten men are in real problem as they down by 0-4 against the defending champions.
47': GOALLLLLLLL . Motarda Fall scored the forth goal for MCFC....A powerful header from Fall of a freekick from Ahmed beat Amrinder.
46': RED CARD to DEEPAK TANGRI....he hits straight to Vikram Pratap.
46': REPLACEMENT ATKMB: Hugo out, Willams in
46': REPLACEMENT ATKMB: Liston out, Prabir in.
46': Second session starts.
HALF TIME SCORE: ATK MOHUN BAGAN 0-3 MUMBAI CITY FC
45+4': Referee blew the whistle for half time.
45': 4 minutes added time.
43': A cross from Amey from the right inside the danger zone of ATKMB, but Pritam saved the situation before Bipin could create any danger.
41': A freekick from Amhed but Fall failed to control, ball cleared by Pritam.
37': GOALLLLL . Igor scored the third goal for MCFC. Igor was almost free inside the 6 yards when he recieved a pass from Fall. 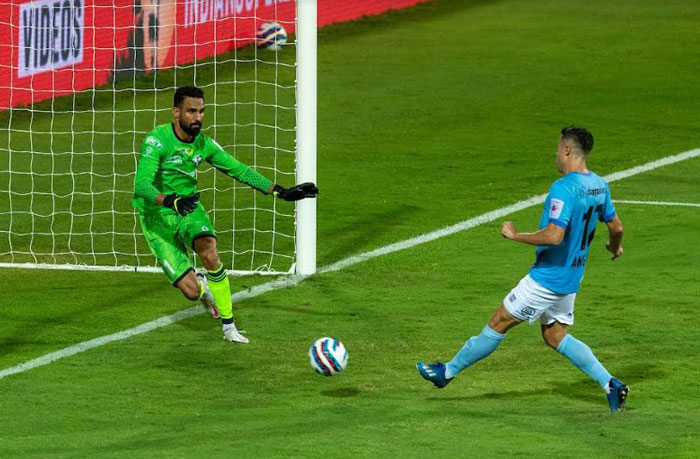 36': A shot from cassio of a pass from Vikram saved by Amrinder.
33': A chance wasted by Igor.....shoots wide of the target of a pass from Amhed with just Amrinder to beat.
31': YELLOW CARD to deepak rough play against Lalengmawia.
30': ATK MOHUN BAGAN 0-2 MUMBAI CITY FC
27': MCFC are leading against while ATKMB are yet to create any positive chance.
24': GOALLLLLL Vikram Pratap scored his second goal. a long run by Bipin from the left and Vikaram scored in second attempt after the ball defected of Amrinder.
21': A header from McHugh of a defection from Nawaz but the ball went over the cross bar.
19': A cross from Vikram from the right after he got past two ATKMB defenders but Igor was a bit slow, ball went over the touch line.
17': A cross from Mandar from the left of a pass from Igor, but Amrinder collects safely.
15': ATK MOHUN BAGAN 0-1 MUMBAI CITY FC
13': A cross from Bipin from the right but Pritam cleared the ball out of the danger zone.
11': A forward pass from Hugo to Manvir down the right but MCFC in control of the situation.
7'> An acrobatic effort by Igor of a pass from Bipin but Amrinder saved the situation.
4': GOALLLLLLLLL Vikram Pratap scored for MCFC....A cross from the right by Bipin and the young striker pushed the ball in the net.
3': A move by Vikram from the right but blocked by Subhasish 1': A cross from Manvir cleared by Amey for a corner., Liston's corner cleared by MCFC defense.
0': Match kicks off at Fatorda.
*** PRITAM KOTAL make his 100 appreance in Indian Super League.
*** MUMBAI CITY FC won against ATK Mohun Bagan in the final of the 7th edition by 2-1 and declared as champions. *** The defending champions Mumbai City are in the 6th position with 3 points from 2 matches *** ATK Mohun Bagan leading the league table with 6 points from 2 matches.

Reigning champions Mumbai City FC were dealt their first defeat of the season by Hyderabad FC in their Hero Indian Super League (ISL) match at the PJN Stadium in Fatorda, Goa on Saturday. The Nizams came away 3-1 winners on the night with a brilliant comeback victory against the Islanders who scored early into the game. 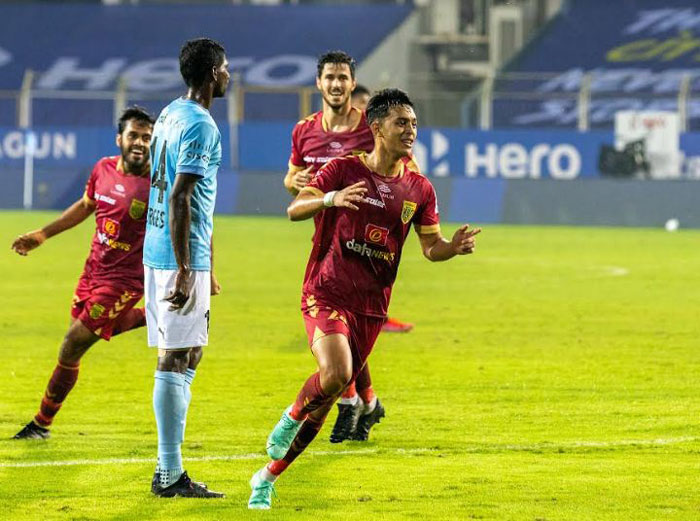 Ahmed Jahouh (6’) opened the scoring with a thumping right-footed finish after the HFC players failed to clear their lines inside the penalty area. Joao Victor (13’) brought the game level by converting a penalty with calmness. HFC went into the lead with Bartholomew Ogbeche (53’) scoring his first goal of the season against his former team. 19-year old Rohit Danu (82’) sealed victory by scoring the third goal for his team.

Mumbai City FC made one change to their starting lineup as Mohammad Rakip came in for the injured Vignesh Dakshinamurthy. On the other hand, Hyderabad FC made two changes to the team by bringing in Joel Chianese and Aniket Jadhav, while Edu Garcia and injured Halicharan Narzary lost their place in the starting lineup.

The Islanders started all guns blazing with Jahouh scoring from the first shot on target thanks to some shoddy defending from the opposition. However, the Nizams came right back into the game after Bipin Singh fouled Joel Chianese inside the penalty area.

Skipper Joao Victor made no mistake with the penalty and rifled it in the back of the net despite Nawaz correctly guessing the ball. The custodian made an important save from Asish Rai a few minutes later to prevent HFC from going into the lead. Rahul Bheke had a great chance to score in the 27th minute but his attempt from close-range went wayward. Teams went into the halftime break on level terms.

Hitesh Sharma was the first player to be booked after committing a foul on Apuia post the restart. Chinglensana Singh also picked up a yellow shortly after. Bartholomew Ogbeche then scored HFC’s second goal from close range after a brilliant build-up play from the side, eight minutes into the second half. Jahouh also received a caution for a poor challenge minutes later.

In a series of changes by both camps, Des Buckingham sent Ygor Catatu from the bench who replaced Cassio Gabriel on the hour mark. Following suit, Manolo Marquez changed Rohit Danu for debutant Aniket Jadhav and Edu Garcia for Chianese. Rowlin Borges also came on by replacing Raynier Fernandes and almost scored the equaliser in the 78th minute.

Rohit Danu then scored HFC’s third with a powerful close-range right-footed shot after pouncing on a second ball. This was Danu’s first goal in the Hero ISL and he repaid the faith shown in him by the gaffer. Catatau was shown a yellow card for a high-boot late into the contest after frustration had set in.

HFC held a good shape for the remainder of the game and secured their first win of the season. Interestingly, this was also their first-ever victory over MCFC.

Mumbai City FC will next face ATK Mohun Bagan on Wednesday while Hyderabad FC is up against Jamshedpur FC on Thursday. 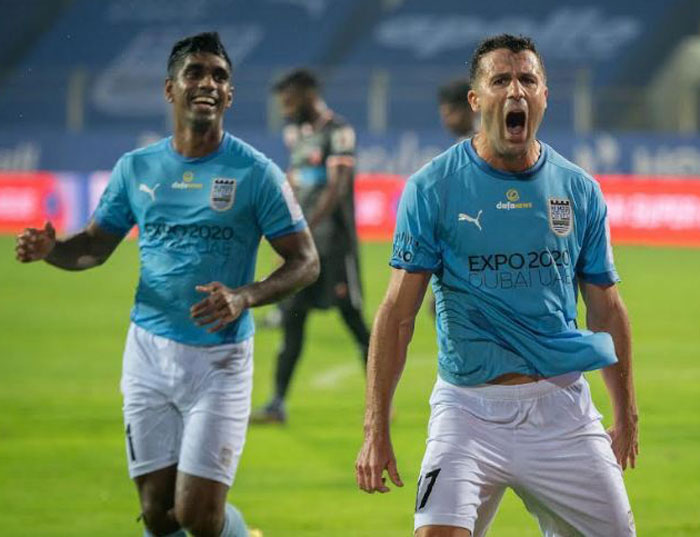 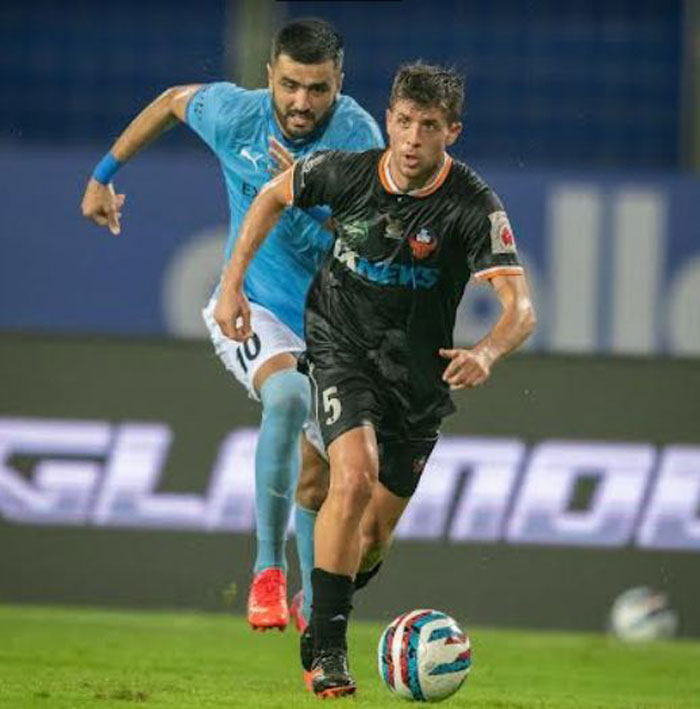 ISL PRESS RELEASE : Igor Angulo continued from where he left last season, a dominating outing though against his former side as defending champions Mumbai City FC beat FC Goa by a convincing 3-0 margin, here in a 2021-22 Hero Indian Super League (ISL) match at the Pandit Jawaharlal Nehru Stadium in Fatorda on Monday.

Angulo (33' P, 36') scored twice under three minutes in the first half before Brazilian Ygor Catatau (76') celebrated his ISL debut within minutes of stepping onto the pitch, closing the match for the City Football Group-owned club in their season opener.

Des Buckingham on his first match as Head Coach on Indian soil showed off Mumbai City's summer signings in the starting XI. Apuia, Mohammad Nawaz, Rahul Bheke, and Cassio Gabriel all started alongside Angulo. FC Goa's replacement for Angulo, Airam Cabrera led the line for the Gaurs. Brandon Fernandes remained unavailable for selection due to injury. 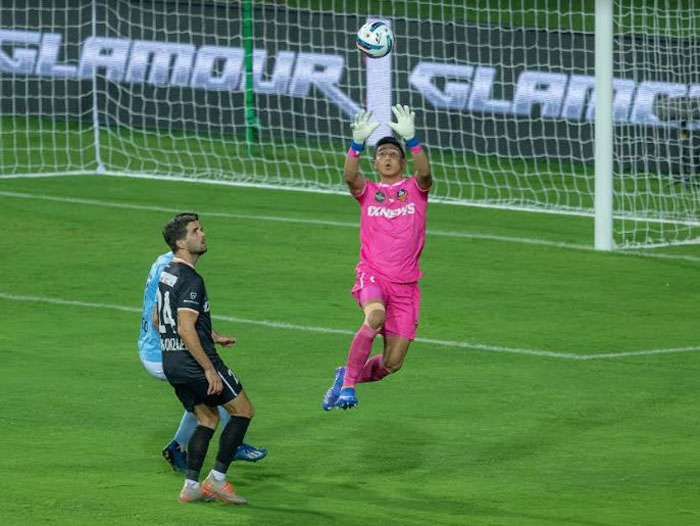 There was drama early on with Leander D'Cunha let off for what looked like a possible foul inside the box for tripping down Vignesh Dakshinamurthy. The Mumbai City wing-back had to be subbed off in pain.

The game opened up after the half-hour cooling break. Gabriel received a cross with Ivan Gonzalez looking to clear. He brought himself between the ball and the FC Goa player and Ivan's mistimed tackle led to a penalty kick. Angulo converted the spot-kick with glee, beating old teammate Dheeraj Singh, who otherwise had a decent night.

Minutes later, it was time for Raynier Fernandes to turn provider. A sharp turn in midfield led to the ball played through for Angulo. The Spaniard took a deft touch, rushed past the defenders, and shot fiercely as the ball went into the net past Dheeraj's right.

Mumbai City could have had a third before the break only for Raynier's shot to be stopped by the crossbar. Big-money signing Apuia controlled the midfield with ease. Juan Ferrando turned to his bench as he got in Nongdamba Naorem in the second half. Captain Edu Bedia almost halved the deficit with a half volley that flew over the bar.

Cassio Gabriel was the star of the second half with his industrious invasions inside FC Goa's box. Ygor Catatau then came off the bench to nod in a free-kick sent in by Ahmed Jahouh, sealing the deal. Mumbai City seem to be ready for a march in their title defense while FC Goa would like to quickly get over the defeat as they entertain Jamshedpur FC next on Friday.